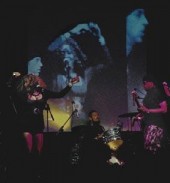 >
This profile was edited with Thomas' myspace editor™ V2.5

,
P-Theory's mission was always to deliver live guitar based music that you could dance to and to bring the funk back!
Although primarily based in the UK, the focus and drive eventually lead P-Theory to the home of the original funk Plainfield, New Jersey and the legendary Kevin Goins (member of Quazar, General Kane and Space Cadets). Kevin, along with his late brother Glenn, had created many funk landmarks during his career and has one of the most highly respected soul voices ever.
The bond and mutual respect was instantaneous and lead to the successful creation of their first album together within just a 2 week period which went on to sell over 3,000 copies in the first 12 months of its release from their website alone.
Like Kevin said "I thought I was coming over to some weak shit but y'all put The Funk on a joker. changed my mind, yeah white boys can jump!"
So proud of their work was Kevin he took the band home to Plainfield New Jersey (the home of PFunk) to meet the family, gig, and record gospel for his church on his home turf. Subsequent dates in Brooklyn and Manhattan and rave reviews helped to place the band firmly in the hearts of the originators of funk, soul and Gospel music.
Upon their return to the UK P-Theory played 6 sell out consecutive shows in June 2006 across the UK. In September they went on to gig and record with the legendary Doug Wimbish and Skip Macdonald during the Liverpool Arts Festival.
Ultimate respect for both the band and their debut album 'From The Hood to the Wood' came from the acclaimed US radio show 'Joe Kelly in the Upper Room' when he featured them in June last year, conducting both a cross channel live Interview with band leader Alex Cambell and playing several tracks from the album he referred to as "An Outstanding Record".
The success of "From The Hood To The Wood" lead to healthy balance sheet for the band that enabled them to continue their mission. The band became a successful business but remained true to their roots and original mission. This home grown dedication and commitment meant that P-Theory could expand their horizons to amore global level.
The band felt it was appropriate to thank God for the blessings he had given them and to take the funk back to its true roots which was in the Church. As such the follow up gospel funk album "Chocolate Sock" was written and recorded in 2 days in November 2006. Recorded live in a 1,000 year old church in rural England "Chocolate Sock" used the same basic ingredients as its predecessor, of vintage instruments and recording techniques to capture a live feel. It also delivers tighter arrangements and structured songs whilst maintaining the organic vibe P-Theory became renowned for.
A full UK tour is sheduled in April 2007 to support the release followed by a church tour US in July, Northern Europe in September and a further 10 UK dates in October 2007. Global distribution has also been agreed.
May God bless you!
P-Theory

P-Theory - The British are Coming (Trim)

P-THEORY - SHE`S THE FREAK OF MY DREAMS

P-Theory - Wait At The Mountain