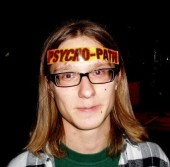 With their unique brand of alternative rock, fronted by a charismatic singer, two powerful guitars and a tight rhythm section, Psycho-Path is a formidable force live on stage. No pretention - eclectic, honest, sweaty, sexy and very guitar-laden.

Together since 1993, Psycho-Path have gained a lot of respect on the scene. Even from such prolific artists as Scott McCloud, Dälek, Josh Homme and many more.

Touring all over Europe and with 4 full length albums (with the 5th one coming out in March 2008), this is a band with experience.

The band met up with the independent multi-genre label Moonlee Records in 2007 and decided to join forces and release their new album with them in 2008. Since both parties work with a DIY aesthetic, yet still think a few steps ahead, this is a logical union of some of the most active and hardworking individuals in the scene.

“The Ass-Soul of Psycho-Path” coming out in March 2008 on Moonlee Records, with a promotional tour all over Europe to follow. Check ‘em out live. Be ahead of the pack, so you can say: “I was there.”

1994 1996: - numerous concerts in Slovenia, Hungary, Austria and Croatia. - the man in the shadow Stefan KovaC “Pipi” joins the band as the sound technician and becomes an irreplaceable part of the group

1996: - release of their first demo MC »KISS&KILL TRAX« (self) which was sold out immediately. Thru gigs with Zeni Geva, GVSB and Faith No More they gain popularity in Slovenia

1997: - release of the debut album »Jiu Jitsu« (self), produced by J.Kell of Sans Secours, followed by numerous gigs across Europe

1998: - band gets all the possible and impossible awards for their debut album in their home country… in that year the band also tours with Sans Secours in Germany and Austria

1999: - release of the second album »Autoerotic« (self), produced by J.Kell, followed by tours across the continent and (again) some music awards in Slovenia

Oct. 1999: - the band gets involved with a contemporary dance-theatre project choreographed by the world famous Matjaz Faric and his dance group »Flota«. The performance is a huge success also because of Psycho-Path's soundtrack and live performance in the show

2000: release of the third full length album »Terminal« (Multimedia Rec/UMG); in that same year the band appears on the Visions Newcomer stage at the Bizarre festival (Germany), where they were proclaimed Newcomers of the year

2001: - Denis, the guitarist, leaves the band, but the band decides to continue with only one guitar player. Psycho-Path play all over central and south Europe, including the Bizarre festival's main stage.

2002-2003: - European support-tour with Girls Against Boys. Band gets signed by Multimedia Records / UMG . All forces are directed into the pre-production of their first proper international release - band splits with the label in a friendly way - recordings for their last full length piece »Désinvoltura«

2004: - release of »Désinvoltura« thru More Noise Less Music and Exile on Mainstream records - international release thru Southern - numerous gigs across Europe and the UK

2005: - Matej Savel, drummer and one of the founders of the band, retires from active touring and songwriting. But he continues to work on with the band as a consultant - Dominik Bagola, drummer, this time (since he already jumped in as a substitute drummer before) fully and officially joins the band - Saso Benko, guitarist, is invited to join the band