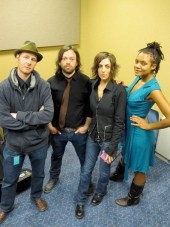 ABOUT PO'GIRL
The interplay between Allison Russell, Awna Teixeira, Benny Sidelinger, and Mikey "Lightning" August is truly something to behold. They are distinct voices with incredible harmonies; multiple instrumentalists who bring the perfect sound to each song and songwriters who pen poetic tunes you'll find yourself humming. Po'Girl showcases a wide array of instruments-from gutbucket bass, accordion, clarinet, banjo, dobro, guitar, to electric bass, glockenspiel, piano, harmonica, bicycle bells, drums-- and they all frequently trade off instruments with each song. Their fluid and joyous musicality is one of the group's most endearing and irresistible features.
Impossible to put this band in a tidy little box—they're equally at home in Douala, Cameroon playing the Massao World Music Festival, as they are at the International Jazz Festival in Montreal, the Winnipeg Folk Festival, the Woodford Music Festival in Australia or just playing for fun for the people in Vondel Park, Amsterdam.
Suffice to say Po'Girl makes 21st Century roots music, urban roots – never derivative, not faithfully aping a beloved tradition. Russell, Teixeira, Sidelinger, and August don't re-hash the old forms, they reshape and reinvigorate them for new ears. Like genuine gypsies, they wander and play - out on the international road bringing their unique brand of pan North Americana to a widespread audience 250 to 300 days of the year… Always restless, more often than not bone-tired, they write their flashes of sadness, their loss, their good love, their faint dreams of home into songs that matter deeply to them. Like any good art, they are little acts of self-rescue. So you should listen. You aren't much different from them, and who couldn't use a little rescuing these days?
Po'Girl released their 4th studio album 'Deer in the Night' to critical acclaim in May 2009- they followed that up with ' Po'Girl Live' in July 2009 - a live album recorded at various shows over the last year - which captures some of the energy and excitement of a real time Po'Girl concert.
The band spent 3 weeks in January 2010 recording their new album "Follow Your Bliss" in Chicago, Illinois with the fantastic Zach Goheen at the helm. "Follow Your Bliss" was released in April/May 2010 in Europe and in June 2010 in North America.
Where does the name Po' Girl come from?
The name Po' Girl is a nod to the women of New Orleans who at the time of the railroad strikes gathered scraps of food from the restaurants and delivered the notorious Po' Boy sandwiches to the men while they were striking. It is a nod to the solidarity of the workers, as well as to all the musical influences that came out of New Orleans that have shaped Po' Girl's sound.

"With enough sultry ambiance to be at home in either cocktail lounge or New Orleans street corner, Po' Girl's sentiment never feels forced, the lyricism never cliche or false. They manage to maintain that traditional and nostalgic sound while the breathing fresh life into an old-fashioned genre."- Rolling Stone Magazine

"Down-hearted blues from a jazz speakeasy collides with poetic urban grit.PO' GIRL will delight your senses!" -No Depression

"Their uplifting take on American Folk Music, combining it with Jazz, roots and a little bit of pretty much everything else, has the ability to put a smile on anyone's face." – Glasgow American Festival"

"Po'girl is rough and smooth, sweet and tart, and would be huge stars in that supper-cool alternate universe I've always wanted to live in."- Little Village Magazine

"'Deer In the Night' continues to demonstrate the strengths which distinguished their former work, the songs capture a genuine spiritual quality"—Americana UK

."Po'Girl are a breath of fresh air in a genre that was threatening to go a bit stale. They've got that certain something to their sound, not so much edgy, more songwriters with a profound sense of the world they inhabit and want to draw you into, it's well worth a visit."– Fatea Records

"Canadian quartet, Po' Girl produced a first-class show when they made a welcome appearance at the Cluny, time flashed by in double quick time as folk, country, jazz and blues became one. Innovative and boundary stretching, Po' Girl commanded the attention of the audience".-Jumpin Hot Club Live Review

Po' Girl - Sofia No Shame On sale now at www.cdbaby.com!