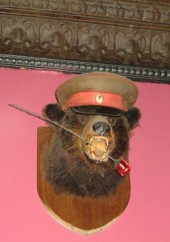 Buy it on iTunes

"Even 'avant-garde' fails to describe quasi-synth-pop collective Plastic Chord, an eight-member band boasting 10-plus instruments-- a slide whistle, a theremin, smart lyrics, and a spooky, sci-fi live show with a high-brow sense of humor that charms as often as it confuses."

(on the song 'Mirrors For Princes') "There is a morose male vocal in the centre of the metal machinery. This is like walking down a long corridor of mirrors that distort your perception of reality, alternative could be an understatement but it's still very accessible for a flexible ear"

"With horns, an organ and guitars, as well as percussion from a xylophone, drumset and assorted kitchen utensils, they made a Beirut-like clatter based around the melodies of frontman Orion Treon. They recently released their Colonial Conundrum full-length and played a number of tracks that are not part of their usual stage show. Closing with “Thang Goin’ On” the drums and xylophone played complementing rhythms as Treon and the band built up the rattle and verve, proving that indeed they do have some thang goin’ on, that indeed these nights and these cities do."

"Plastic Chord are some sort of mutating beast, and they push their own mix by throwing so many people into the gene pool. With nine people on stage, they were at their best with layered proggy sound morphing into a howling dance party. It’s an electro-clatter, Bowie-channeling mess, a gypsy whirl and rush."

Nylon String vs Steel String Guitar! - Which One Should You buy?

How to Play "Fake Plastic Trees" by Radiohead on Guitar

The Red Chord Fixation On Plastics