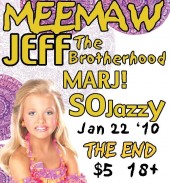 When I look around

And what I see is not the best

But its good enough for me

Its sort of boring

I got a million ways to occupy my mind

And waste my time

I want to release the heat

that's-a building in my chest

Straight into the sun

And then my lighting bolt

Will shine on through to everyone

I been twice around

But I remember where I been

Of all my old best friends

But we're not bleeding out

Because we're really tuning in

So come up to me quickly, baby

And whisper in my ear

But make it crystal clear

THAT GOD IS UNDERNEATH YOUR MEMORY

FLOATING IN YOUR HEAD

VIDEO BY KRISAN, THANK YOU

MEEMAW, son of Quapaw, Cherokee and Comanche, also known as Warm Blood, son of Hot Blood of the Moonlight Battles Where the White Wolf Descended From the Three Weeping Stars and during which many souls were sent to the Lazy River of Oblivion; this man, the one they call Meemaw, accepted the rug of the chieftain, as bequeathed to him by the people -- his father's people -- and they sat down to savor the mulled entrails of the White Bull.

"2007. One day, Wez was pacing down the street, making a call about a television. It was sitting on the dresser of Mona's apartment on the edge of town. Lucca heard the phone ringing over his records and answered the call, Mona halted in mid-paint, leaving a phantom figure without a face to be finished in the future, and they all hit the Street and Said it Aflame, and it replied: "Yes I am. Thanks for noticing."

In response to the Positive Reading, they texted Romulus (Who feels a breeze but is it easy?) and Remus (Who had a funny feeling!), to light the shed with the Thunderwire, providing the Lighting Strike (or did it only light Night like a Tire Fire?) REGARDLESS: Some-Light Dawned, the Sky opened-revealing the gears of the Meta-Clock-but suddenly, the "Sun" turned black, and a Dog played Taps, and the world slept in separate beds. 2008."

Having separated their beds, they set sail to travel Middle Earth and the American Northeast. They encountered trolls, gnomes, shrieking demons, and their own reflections. When the glass shattered, the Shining Triad of Complimentary Opposites feared seven years of bad luck. However, Wez had a vision on the back porch, to which much was revealed. The were to construct an elevator. A Glass Elevator. They knew the task was daunting but it must be done for the benefit of mankind. They constructed this Perfect Machine, sapping the Energy from their Reciprocal Crystals. Feeling the weakening of their power, Peter Panzer and Heavy Metal Jester came from the Valley of Never-Ending Spite to usurp their Meta-Throne. MEEMAW knew their was only one thing to do: destroy the evil monoliths by hanging out in the name of Bad Ass Rock & Roll.

The group of MEEMAW, inside of Glass Elevator, disappeared on their way from a place in Nevada they called The Valley of Never-Ending Spite, to return one day unscathed.

Wanda Peek Presents: "This Is Your Life MeeMaw"