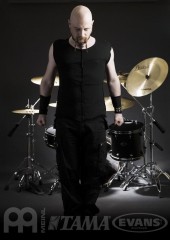 Location:
Stockholm, Stockholms län, Sw
Type:
Artist / Band / Musician
Genre:
Metal / Progressive / Folk
BioConnections
Therion
Scott Ian
Maxine Petrucci
Mats Leven
Marcus Jidell
Hank Shermann
Thomas Vikström
Glasson
Mats Attaque
Lori Lewis
Mathias Garnas
Overnight Sensation
Messiah Marcolin
Born in Karlsborg 31 May 1977.
I got my first drum kit when I was nine. It was 1987 and I started, together with my brother (Axel) and a friend (Exo, now Beyond Twilight) a band called Fuzz Box.
I went to the municipal music school 1988, where I played military music in the school orchestra.
Played on my first CD. Guitar Heroes of Sweden 1991. We changed the band name to Conspiracy. Conspiracy played on a local festival called ”Ungt forum”. I was (14 years old) appointed in the local newspaper SLA as ”The musician of the year”.
1993 I joined Master Massive that was something of a cult band in the area of Skövde. Advanced metal performed by highly skilled musicians.
1995 my brother was awarded on second place in TV4’s “Sikta mot Stjärnorna” as Gene Simmons and his cover band called PUSS I joined the band and we toured for about two years, with full make up, in Sweden. During the same period I worked as a freelance drummer and contribute on records together with Swedish cult rocker Eddie Meduza and “Flintstens med Stanley”.
In 1996, I and some friends started the band Kajarr and competed in "Musik Direkt" (a contest for young talents) and ended up in the finale, playing live on Swedish national TV twice.
1999 I did some choir vocals on Morifade’s Possession of Power.
2001 I hooked up with Exo and Kalle Nyhlin and formed the band Argento. This was a great new start for me. I was really inspired and wrote a lot of good material. But as time went by it became more and more as a one man’s project (I made all the songs and played all the instruments), and later I decided to disband this project as well.
2004 I was asked to join Therion as a session drummer for their world tour.
I accepted and shortly after that I became a permanent member 2005 The DVD Celebrators of Becoming was released.
In the summer 2006 we recorded Gothic Kabbalah. On this record I composed 40% of the music. I also played rhythm and melody guitar on five songs, lead vocals on two songs and contributed to the choir on all the songs.
2008 we released "Live Gothic" where I also did the sound mix. 2006 Therion did a show with a full symphonic orchestra and choir in Bucharest, Romania. We repeted this great event in Miscolk, Hungary 2007. This show was released on DVD (The Miscolk Experience) 2009. For 4 years I did over 200 shows in more then 35 countries with Therion.
It was a great experience and a fantastic "school". But in 2008 I decided to leave Therion. It was just time to break loose and do something else.
Later that year I tracked the drums for the debut CD of Distorded Wonderland which will be released in 2011.
In the year 2009 I started a new project Holocoaster. I'm still in the process of making the first album. But already you can enjoy the video clip of "Another Day-Another Victim" on youtube.
2010 I joined Diablo Swing Orchestra and did shows in England, Russia, Holland, Mexico, Check Rep and Ukrain in the summer.
2011 D:S:O will release their third album.