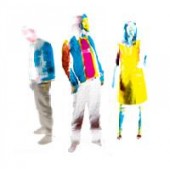 Location:
Beograd, Se
Type:
Artist / Band / Musician
Genre:
Psychedelic / Thrash / Country
BioConnections
Flip
Ana Never
Repetitor
KRSH
euforia
Virvel
Nahty
Irfan Muertes
CUT SELF NOT
Zemlja broj 9
KZP
Cinc
horkestar
GrupaKaoTakva
Splins
Petrol are a psychedelic rock trio from Belgrade, Serbia, formed in 2003 by Ana, Ilija and Milan. The band started out as an improvisational unit without fixed instrumental roles. Experimental jams took place at Ilija’s flat and recordings were made over several months before the band started playing live.
In 2004 Petrol self-released an EP, which was distributed to fellow musicians, radio stations and rock journalists. The EP was well received, with "Petrol Punks” finding its way to some annual singles charts, such as that of Cross Radio - a network of Balkan radio stations. A series of gigs across Serbia followed.
In February of 2008, three Petrol songs were included on “Zdravo Zdravo Zdravo”, a compilation that featured songs from prominent Belgrade bands. That compilation was, in effect, an overture to Petrol’s first LP, "Nezgodno vreme opasni dani" (Inconvenient Times Dangerous Days) which was recorded and produced by Hrvoje Niksic-Niksa at the "Kramasonik" studio, Zagreb. The album was released in October 2008 by “Odlican hrcak”, an indie label from Belgrade, as part of the "New Serbian Scene" series - a set of releases from a wave of bands to emerge in the late 00's. The first single “Sve jedno je” spent several weeks at the top of the MTV Adria chart, with the second single "Beirut" being voted Serbia’s best single for 2008 on B92 radio. The next single “Zebra” topped the charts on several Serbian radio stations.
Following the album’s release, Petrol toured extensively throughout Serbia, Macedonia, Montenegro, Slovenia and Croatia. They played two shows at the State prison in Belgrade and were the first band from Serbia to play in Knin, Croatia after the 1991-95 war. Petrol have played four times at the Exit Festival, Novi Sad, and in june of 2010 they went on a 10-day tour of Holland, playing their first EU gigs. The band performed at the Eurosonic 2011 festival and will perform at the Exit Festival 2011, Main Stage.
The band is currently working on their second album.
---
Sve jedno je. Autori: Djordje Pesevski i Jovan Todorovic.