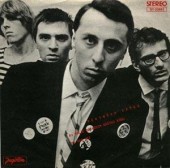 Pekinska patka was one of the most important and probably best punk bands that came from Serbia (ex Yugoslavia). Band members were Nebojsa Conkic-Conta as voice, Sreta on guitar, Bora on bass and Cila on drums.

One of the most impressive shows was in 1978. in Novi Sad on BOOM festival, where they were playing together with Paraf from Rijeka. In 1979. they won as best band on one of the festivals in Subotica. Same year they recorded their first album, but most of the record companies rejected them, which was nothing unusual for punk bands of that time. That first, cult album "Plitka poezija" got released in 1980 for Jugoton.

Sound of Pekinska patka was totally new and original even though they were not one of the first punk bands in Yugoslavia. Songs were short, fast, sprightly and full of energy. "Plitka poezija" is a legendary release and one of the most wanted among record collectors.

Their second record "Strah od monotonije" came more then a year later and was totally opposite and different. Sreta and Bora left the band and got replaced by Bale on guitar and Mare on drums. Quality of the sound was outstanding, but tone was dark, suggestive and songs were much slower. It was close to the sound of Joy Division and fans didn't like it as much as the first one.

After this album, Conta went to mandatory army service and rest of the guys started playing in other bands. In the next few years Conta and Bale left the country and are now somewhere in North America.