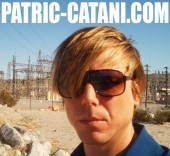 and after their first Live Concert at Cosmic Orgasm / Ruine in Cologne releases on Monotone and Titanium Steel quickly followed.
It happened that Patric continued the project alone but did various stuff with
DJ Moonraker.

Exploring the edge of Hardcore Techno, Gabba, Breakbeats and Amiga Noise and travelling the world to play shows on his two Amiga 500 Computers for a few years,
he moved to Berlin in 1995 and formed together with

During a few months they had the debut Album on DHR ready and could go on tour various times in the United States, Japan and Europe.
They released three EC8OR Lps and various EPs and other solo material on DHR like
"The horrible Plans of Flex Busterman" or "100 DPS".
Also there was the EC8OR Release on the Beastie Boys Label Grand Royal called "All of us can be rich" and japanese releases on the Label Beat Ink.

After the last tour in the states in 2000 Gina and Patric continued their other bands and projects. Gina went on with Cobra Killer and Patric produced music with Paul PM, Max Turner, Chilly G on labels like Wordsound/Black Hoodz, Make some Noise, Gagarin and many more.
He produced a few Tracks for and with Hanayo and started his new solo project

74 Min Booty Bounce Mix that's slapping you with lots of bangers and hits. Also includes tons of my own Mash Ups - silly dump and fun tracks I made in the last years. A lot of it is still unreleased and even more is just made for being played at parties.

This project creates great freedom! Not only for Patric who can finally combine all his different musicstyles, moods and edgy wellness waves into a rocking live show!
The last Album was released on Mouse on Mars label Sonig but check the Candie Hank site for additional information about the releases on Gagarin Records, Wwilko and Solnze.

Also he produced quite a lot of the songs for the Puppetmastaz and worked on Music with Angie Reed.

and Patric Catani are working on an Album for their band Driver&Driver and there will be news and recordings soon. Check:
Driver&Driver Myspace

. there is a lot of material ready for the Gameconsole project "Toytone" and there should be more Gp2x/handheld concerts with Marc Nostromo happening. The music has enough variety to play from beaches to catacombs.

or find me on Hexawe

Besides the band projects Patric Catani worked with the director Johan Simons at the "Volksbühne Berlin" and "Münchner Kammerspiele" on Theatre works
and provided / composed music for several movies and audioplays.

In the last years he expanded his field to make music and Soundinstallations for artists like Sigismond de Vajay, Nina Fischer + Maroan el Sani and lately Jorinde Voigt.
The work with Jorinde Voigt and Chris Imler was the Lemniscate Multichannel surround installation created in Berlin and Watermill Center Long Island/NY.
The recordings are available on

Get my music on I-Tunes:

A*CLASS - Nightmare (at the Discotheque):

Visit me at
CATANI-MUSIC.DE
GET NEWSLETTER AND KEEP UP TO DATE!