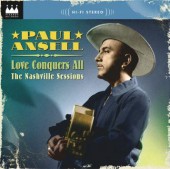 Paul Ansell & No 9 "Live at Sun" now available at

Beyond categories, the music cannot and should not be pigeonholed into one genre. On each album you will find a mix of stuff and styles, many self-penned

songs, many cool covers of neglected great songs from the past, and also well known songs, re-worked, and given a fresh makeover. A mix of country, rockabilly, blues, soul and rock n roll, keeping true to the music that most influenced him. THE GREATS ALWAYS MIXED IT UP. From Elvis to Ray Charles, Sam Cooke to Charlie Rich, The Rolling Stones to Eminem - they all play around and rework songs. And that's the Paul Ansell vibe.

No 9 were formed back in 1993. They have recorded ten albums, the latest being LIVE AT SUN, recorded in Memphis in 2004. Paul Ansell's songs and band have been in the forefront of the European rockabilly/rock n roll scene for well over ten years, and Paul takes particular pride in the fact that his music is played alongside his idols by the DJs and club owners, at the clubs and venues that feature this brand of music. Ansell and No 9 have headlined many of the top Rock n Roll festivals both in England and abroad - Hemsby on several occasions, Viva Las Vegas, Green Bay, The Rockabilly Rave, Turnhout, The

Americana Festival, The Ponderosa Stomp, and many, many other shows.

Paul has sung at venues such as London's Jazz Cafe, The Queen Elizabeth

Hall, The Forum, The 100 Club, and Dingwalls, to name just a few. Although a fine songwriter and performer in his own right, Paul's biggest achievment was to meet and play alongside his guitar hero Scotty Moore, right hand man to Elvis Presley and the man who played on his greatest ever recordings. This relationship has resulted in many wonderful chances to appear and play alongside other all time greats, culminating in the Universal Films TRIBUTE TO THE KING DVD featuring some of the all time legends of rock paying respect to Scotty's legacy, and Paul is on vocals on several Elvis tunes alongside such luminaries as Eric Clapton, David Gilmour, Ronnie Wood, Bill Wyman etc.

Paul Ansell at the Ponderosa Stomp, 2006

Videos of Paul and his new band coming soon!!!!

Paul Ansell - Go Ahead On