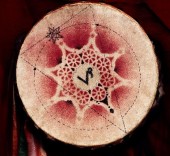 Patti Smith, born in Chicago in 1946, the oldest of four siblings, was raised in South Jersey. From an early age she gravitated toward the arts and human rights issues. She studied at Glassboro State Teachers College and migrated to New York City in 1967. She teamed up with art student Robert Mapplethorpe and the two encouraged each other’s work process. Both of them pursuing painting and drawing and she poetry.

In February 1971 Smith performed her first public reading at St. Mark’s Church on the lower eastside, accompanied by Lenny Kaye on guitar. In April of the same year she co-wrote and performed the play Cowboy Mouth with playwright Sam Shepard. Continuing to write and perform her poetry, in 1974 Smith and Lenny Kaye added Richard Sohl on piano. As a trio they played regularly around New York, including the legendary Max’s Kansas City, centering on their collective and varied musical roots and her improvised poetry. The independent single release, Hey Joe/Piss Factory, featured Tom Verlaine.

Along with the highly innovative and influential group Television, the trio helped to open up a restricted music scene that centered at CBGBs in New York City. After recruiting guitarist Ivan Kral, they played CBGBs for eight weeks in the Spring of 1975 and then added drummer Jay Dee Daugherty. Smith described their work as “three chords merged with the power of the word.” Smith was signed by Clive Davis to his fledgling Arista label and recorded four albums: Horses (produced by John Cale), Radio Ethiopia (produced by Jack Douglas), Easter (produced by Jimmy Iovine), which included her top twenty hit “Because the Night”, co-written with Bruce Springsteen, and Wave (produced by Todd Rundgren).

In October 1979, Smith retired from the public eye and moved to Detroit. In 1980, Patti Smith married Fred “Sonic” Smith and they had two children. In 1988 they recorded Dream of Life (produced by Fred “Sonic” Smith and Jimmy Iovine) that included the classic anthem, People Have the Power. It also marked her final collaboration with three of her closest companions, all who met with untimely deaths; Robert Mapplethorpe, who photographed her for the cover; Richard Sohl, who provided all of the keyboards; and her husband, who composed the music.

In the summer of 1995, with the help of old and new friends, Smith released Gone Again, (produced by Malcolm Burn and Lenny Kaye) a highly acclaimed meditation on passage and mortality. In touring the album, opening for Bob Dylan, it also marked her re-emergence as a performer. By 1997 a new band was formed with Lenny Kaye, Jay Dee Daugherty, Oliver Ray and Tony Shanahan. The group recorded Peace and Noise, which incorporated a blend of the spoken and sung in her trademark incantatory style and reflected the feel and inner play of a working group. Smith and the band toured and participated in benefit work, including the Neil Young Bridge School, Jewel Heart, and the Tibet House Foundation. The song 1959 from Peace and Noise, written by Smith and Shanahan, was nominated for a Grammy in 1998.

With Gung Ho in 2000, her eighth album on Arista Records (produced by Gil Norton), Smith continued the process of merging tradition with the new. As in former albums, she drew on the inspiration of spiritual and political leaders and events, as well as heralding the efforts of the common man. From Mother Theresa, who exemplified charity, to the resilient Vietnamese patriot Ho Chi Minh, Gung Ho explored those who - as the slogan implies – entered into service with enthusiastic heart. Glitter in their Eyes from Gung Ho, written by Smith and Oliver Ray, was nominated for a Grammy Award in 2001.

Patti is the author of Witt, Babel, Wool Gathering, The Coral Sea, and Complete, a catalog of lyrics, photographs, illustrations, original artwork and reflections. A volume of poetry, Auguries of Innocence, was published in 2005. Patti Smith’s drawings have been exhibited at the Robert Miller Gallery in New York, the Museum Eki in Kyoto, the Pompidou Center in Paris, and the Museum of Modern Art in New York.

In 1999 Smith read at The Whitney and Guggenheim Museums. In November 2000, she participated in the launching of the William Blake exhibit at London’s Tate Gallery with a performance with Oliver Ray at St. James Cathedral, and also at the New York Metropolitan Museum of Art in conjunction with its William Blake program in June 2001 and the Diane Arbus exhibit in 2005. In September 2002, Strange Messenger, an exhibition of drawings, newly created silk screens of images depicting the remains of the World Trade Center 9.11.01, and black-and-white Polaroid photographs printed in silver gelatin process, opened at the Warhol Museum in Pittsburgh. In 2003 the exhibition toured The Contemporary Arts Museum in Houston Texas, The Institute of Contemporary Art in Philadelphia Pennsylvania, The Parco Museum in Tokyo Japan, The Haus der Kunst in Munich Germany, Palazzo Diamanti Ferrara Italy and Museum Boijsman in Rotterdam. Her photographs were exhibited at the Palazzo Fontano di Trevi, in Rome Italy June 2005. During 2006, her art show traveled to Glasgow Scotland and Sligo Ireland and continues to build as it travels around the world.

In 2003, Patti Smith was the recipient of the Torino Poetry Award, as well as the Premio Tenco Award in Italy and in 1975 was awarded the Academie Charles Cros, Grand Pris du Disque Award in France for the recording of Horses.

On June 10, 2005, Smith was awarded by the Minister of Culture for the French Republic, the grade of "Commandeur des Arts et des Lettres, the highest grade awarded to an artist.

In the past few years, Patti Smith has had the privilege to visit and participate in events at several literary foundations, including Hermann Hesse Museum in Montagnola, Virginia Woolf’s Monk’s House in East Sussex England, and the Casa-Museo Frederico Garcia Lorca in Granada Spain.

Aside from recording, performing, art, and writing, Patti is strongly involved in social issues and continues to participate in various human rights organizations. A book of poetry, Auguries of Innocence, was released in Fall 2005 for Ecco Press/Harper-Collins and is currently finishing a book on her growth as an artist and her friendship with Robert Mapplethorpe.

On October 20, 2002, Smith was signed to Columbia Records. In Spring 2004, her first Columbia recording, trampin, was released. The 30th anniversary re-issue of Horses, entitled Horses/Horses was released in Fall 2005, and was heralded as one of the most poignant reissues in the recording industry. It included the digital re-master on one disk and a live disk that was recorded at The Royal Festival Hall as part of the Meltdown festival in London Summer 2005. The musicians on the live recording feature Lenny Kaye, Jay Dee Daugherty, Tony Shanahan, Tom Verlaine, and Flea of the Red Hot Chili Peppers.

On March 12, 2007 Smith was inducted into the Rock and Roll Hall of Fame. Spring 2007 a new CD of cover songs, entitled Twelve, will be released on Columbia Records. Smith is continuing her writing and art projects and will embark in May on a world tour with her band.

Patti Smith - People Have The Power
▶ View All Videos