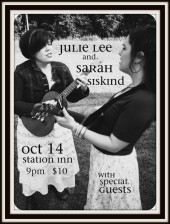 Old Black Kettle is an acoustic side band that Sarah Siskind and Julie Lee formed after frequently performing together in their solo configurations. It features original material written by both songwriters and highlights the strong vocal styles of each, while also featuring the talents of Nashville musicians Kenny Hutson, Lex Price and others. The name Old Black Kettle comes from a Dolly Parton song that Sarah listened to and adored as a child.OBK enjoys playing regularly at the world-famous Station Inn, and in October of 2005 were asked to fill one of the headlining spots at the Americana Folk Festival. The band's unique sound is marked by close harmonies, mountain-rooted melodies, and a selection of original songs that capture the heart.

Old Black Kettle brings an insightful and often intimate collection of songs filled with down-home stories and mountain melodies. Julie Lee and Sarah Siskind formed the revue as a sideband that combines old string-band hymns, ballads, and dance tunes, refashioned into something new and personal. Both artists are acclaimed singers and songwriters in their own right: Julie’s album “Stillhouse Road” is considered one of the best Americana debut albums of 2004, with guest appearances from friends like Alison Krauss, Vince Gill, Dave Peterson, Rob Ickes, and others. Sarah’s intelligent lyrics and captivating performances garner respect from Nashville’s heaviest hitters, including her song “Goodbye Is All We Have”, which can be heard on Alison Krauss and Union Station’s album "Lonely Runs Both Ways."

Most recently, both Julie Lee ('Jacob's Dream' and 'Away Down the River') and Sarah Siskind ('Simple Love') had songs recorded by Alison Krauss on her new CD "A Hundred Miles Or More."