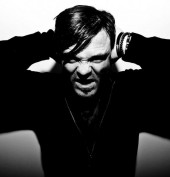 Whether he is travelling the world dj’ing at some of the finest parties on the planet, or producing tracks that gain support from the cream of the world’s elite players, Noir (a.k.a. René Kristensen) remains one of the industry’s most respected and hard working individuals.

In 2007 Noir launched his renowned label "Noir Music" and has already released music by some of the world's best and most famous producers. This was also the year of "Super Skunk" another top release from Noir and this time on his own label.

Now in 2009 Noir can look back at a label that has grown beyond his wildest dreams within the last 2 years and being the platform for his successful debut album "Noir - Best Of (2006-2009).
He also won the award for "Upfront DJ of the year 2009" at the DDJA for always trying to push new music with his skillful and spontanious way of dj'ing.

And there's lots more in store for you. Not only is 2009 packed with great releases on Noir Music, but
Noir has also been very creative in the studio lately and the result of that will be showcased over the summer and fall of 2009. And with Noir's desire to keep evovlving and push the boundaries. He maintain his status as a significant player and innovator on the scene for many years to come.

The label has beeen going from strength to strength since April 2007 and now only 2 years later it's one of the most credible and well-respected labels in the industry.

In August 2008 Noir Music lanched a new series "Dark Stars" to showcase "Noir Music Hits" as well as overlooked creations from the club-world. A great initiative to give quality music a 2nd chance and put even more attention onto the talents of the electronic music industry.

Noir Music is created from love and the desire to be one step ahead rather than two steps behind. A Constantly moving vehicle that doesnt park just because there's a free spot.

Noir Music is about quality
Not quantity.
Join us if you do not fear the
DARK SIDE.