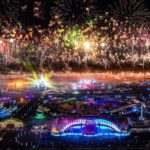 It’s officially EDC Las Vegas weekend once more. In the quickest turnaround in the Insomniac staple festival’s quarter-century history, it’s now ready to move on from its 25th anniversary celebration this past October and get back to its annual May schedule in the desert. And while most may have taken Insomniac’s eight-stage stream in 2021 for granted, EDC Las Vegas is still graciously permitting those unable to be at the Las Vegas Motor Speedway the opportunity to watch three consecutive days’ worth of sets.

Through Insomniac’s YouTube and Twitch pages, EDC Las Vegas’ 2022 billing will be narrowed down to performances from kineticFIELD, circuitGROUNDS, and cosmicMEADOW as well as a curated fourth stream channel that will feature “top artists and hosted experiences.” Beginning at 5PM and ending at 5:30AM PT each day between May 20 – 22, sets that include Madeon, Porter Robinson, Eric Prydz, Alesso, Kaskade and deadmau5‘s new Kx5 alias, David Guetta back-to-back MORTEN, ILLENIUM, TSHA, John Summit, Dom Dolla, and many more will be shown across all three stream channels.

Pick your stage of choice and enjoy EDC Las Vegas’ 2022 stream below.