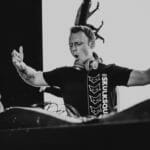 it goes without saying that Tchami has one of the sharpest eyes for the brightest names in house music and he’s now welcoming another new face onto Confession. As 2021 near its final days, Fox’d took a moment to not only share some words of appreciation to those that have supported him, but also disclose that the “biggest release of [his] career” would be touching down in the month of January. And the Los Angeles native is now filling in the blanks with a double-sided EP on Confession, Spirit Animal.

Spirit Animal wasn’t the first time that Fox’d had warranted himself a place on Tchami’s radar, appearing on the tracklist for the Confession boss’ Bat Cave-hosted back-to-back with Dr. Fresch in 2020. To start off his year, Fox’d finds himself right at home on Confession through his two-for-one appearance, with both its chilling title number and its heavy-duty B-side “Don’t Think About Me” continuing to finely grow his sense of darkened, originative bass-house.