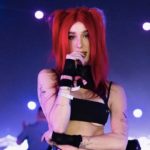 In its most nascent stages, L8NCY was an anonymous undertaking.

Chandler Leighton, the voice and the writer of lyrics to lauded productions like “One More Day” and “Lonely,” wanted a creative outlet to indulge her dance/electronic sensibilities, one where her songs would stay hers, and one that could co-exist with her artist project—without interfering with it. The conditions for their concurrence, she concluded, would require her to be faceless and nameless in the context of L8NCY, pronounced “latency.”

“At first, I was gonna do L8NCY without saying anything. I wasn’t going to put my picture on it or attach my name to it. I was going to wear a wig on stage, like I was going to be completely ghost about it,” Leighton told Dancing Astronaut in her May Supernovas interview.

But plans change, and on the evening of May 21, the one part of this statement that remained true pertained to the wig; with a bright scarlet substitute set atop her head, Leighton strode onto EDC Las Vegas’ bassPOD stage to put both a name and a face to L8NCY. She debuted the side project with a live rendition of “Reflection,” distributed via Bear Grillz‘s Rude Service label, during his set with Kompany.

L8NCY, Leighton said, will embrace elements of pop, deep-house, and trance as it matures, marrying her inimitable vocal presence and lyrics with production aided by her producer and co-writer, Brennan Lony, as well as producers with whom she chooses to collaborate on the L8NCY project, like Bear Grillz. Eventually, the endeavor will translate to the events circuit in the form of DJ sets that couple controllers with guitar, drums, female vocalists, and of course, her own vocals, all live. And as Leighton continues to learn how to DJ while coloring in the outline of L8NCY’s longer-term steps, she’s giving shape to the project’s sound with “Reflections.”

“The person who I was with for a long time hated this industry I was in, which I can understand. It takes a certain type of someone to be with someone in the industry, because it’s tough, it’s time-consuming, and it’s a lot of late nights…but by being with that person, I was losing parts of myself trying to be a reflection of him. I didn’t even know how much of myself I was sacrificing to keep someone in my life,” Leighton explained in an exclusive comment to Dancing Astronaut on the impetus for the single.

The kinetic collision of melodic production and Leighton’s double-threat package of words and voice is available to stream below. Read her Supernovas profile here.