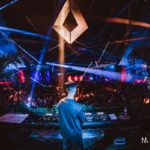 At the tail end of 2020, something caught Cassian‘s ears: the first demo of “On My Knees.”

“It had a wildness and darkness that I loved immediately,” he reflected in press supporting his remix of the song, from RÜFÜS DU SOL‘s fourth studio album, Surrender. About a year later, Cassian had finished mixing Surrender. His next steps were undefined and ready for scripting; he’d find their shape in the “On My Knees” stems. Though Cassian flirted with the notion of fashioning an “On My Knees” remix for RÜFÜS DU SOL’s Sundream Tulum festival in March, come the end of February, there was no such spin to be found on his hard drive. But some people work best under pressure. From the sounds of his take on “On My Knees,” Cassian is one of them.

“Amongst the madness of preparing for my DJ and live sets I somehow managed to put the remix together,” he remarked. In line with his intentions, the nearly six-minute edit debuted amid the white of the sand and the blue of the sea in Tulum, where RÜFÜS DU SOL and Papaya Playa Project presented the first iteration of Sundream festival. There, the crowd’s reaction would “cement the direction” in which Cassian had taken the remix.

Sonically, the Aussie trio’s ardor for the low end remains intact on Cassian’s version, which augments the subs while preserving many elements of the original—”as many as possible,” in fact, according to Cassian. The amplifying recasting can be streamed below.