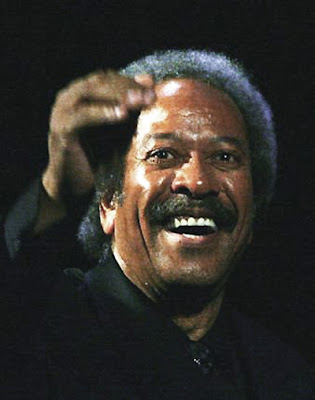 The quiet genius of Allen Toussaint flowed like a river through the city he loved. Enormously talented, he knew few equals as a songwriter, producer and arranger, yet he carried himself with humility and grace. "My music is homegrown from the garden of New Orleans," he said, preferring always to deflect the attention away from himself. Genteel, immaculate, Allen Toussaint was, without a doubt, one of the most wonderful people I've ever known.

I first met him in 1988 when I took the bus up to Clematis Avenue and knocked on the door of his Sea-Saint Studio. I was nothing short of amazed when he welcomed me in, and showed me around himself, even taking a seat at the piano and playing a little something. From that moment on, I became his disciple, and went to see him perform whenever I got the chance. 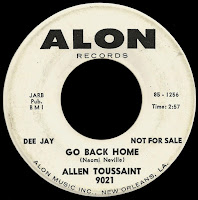 As I continued in my quest to find the records he had a hand in creating, the doors kept opening in front of me, as one obscure discovery seemed to lead to the next. When Katrina hit ten years ago, Toussaint was the reason I started writing this stuff on the internet, as it felt like the wind might just blow it all away... Go Back Home (Alon 9021) would become my first B Side post in September of 2005.

Since then, Allen and his music have seemed to run like a thread through everything I've ever written. If you type his name into one of those red kelly search boxes, you get over ten pages of results. In 2006, I went so far as to dub him 'the Patron Saint' of the site, as he cut so many great B sides. The more I discovered about him, the more impressed I became with the impeccable quality of his work. In 2008, I put together a podcast called An Instant of Toussaint that pulled together some of the under-appreciated records he produced for the New Orleans label, and the hits just kept on comin'.

I didn't know what they meant at the time, but most of the 45s I was putting up bore that 'cryptic hyphenated set of two numbers' that would come to be known as The Cosimo Code. As we moved forward in researching and building the site in 2012, Toussaint and his work became more prominent than ever before, and the more we learned, the more it confirmed his importance in the development of the music. 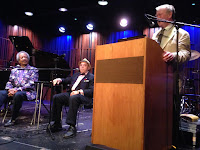 This past April, when John Broven was invited by the French Quarter Fest to moderate a discussion about Cosimo Matassa that would feature Allen and Deacon John Moore, he asked me along to do a short presentation on The Cosimo Code, and what it represents. I was truly honored, and not a little nervous, to say the least... after all, this meant I would be sharing a stage with Toussaint!

You can check out a video of the entire panel discussion on The Cosimo Code, but I wanted to include this short clip from that day here:

Always at his best when someone else is in the spotlight, Allen's piano here is positively brilliant. I didn't know it would be the last time I'd ever see him....

"Music is everything to me short of breathing," he said, and now that music is all we have left. Rest In Peace, Southern Knight... this world is a smaller place without you in it.
Share Page: