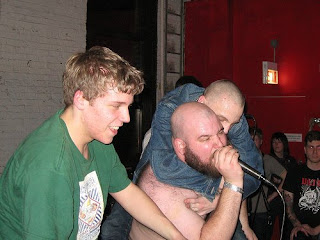 It’s odd that it’s taking a while to sink in.
Especially considering that Fucked Up, the critically acclaimed Toronto hardcore punk band, is about as subtle as a two-by-four to the skull.
My friend Rich and I caught the second of their two shows in Chicago, which is a light day’s work for a band that once played for 12 straight hours in store window. I’m not sure how much sucking up to the Mrs. was required by Rich afterward, but being single, I don’t have such concerns.
Smitten by the release of the highly-touted The Chemistry Of Common Life, I couldn’t resist seeing FU live. Both having various illness-related issues, Rich and I nearly didn’t make the trip but decided to get our senses pounded anyway.
The Empty Bottle looks like a bomb shelter. It also doubles as a pretty nice small club with good sound quality and we found a good spot in the back, dead center, to take in the show.
Like any band with some talent to come down the pipe recently, they have to resist strangulation by tentacles of media hype. FU has been hailed as saviors and throwbacks to the punk and hardcore scenes by various pundits.
I don’t feel any need to jump into that debate. What I do know is that there’s a huge void for an utterly ferocious rock act and I’d recommend Chemistry to anyone pissed off for any particular reason that needs to get it out of their system.
The bomb shelter probably felt spacious to FU. They notoriously played a song in a men’s bathroom for MTV Canada and music like this lends itself to volatile crowd reactions.
Which is why it was nice to have a clear view of the stage from behind the mosh pit. It would be impossible to duplicate the immense layering and production values of Chemistry live so the band compensated by playing like they had a contest chugging Red Bull before taking the stage.
Crooked Head, a 6-minute track on Chemistry, seemed like it finished in three. They almost played too fast, if that’s possible for a punk band (if you choose to call them that), but a hardcore band that starts its album with a flute solo clearly doesn’t give a frog’s fat ass what anyone thinks.
Upon first listening to Chemistry, lead singer Damien Abraham (i.e. Pink Eyes) has a voice that will put you off and make you think they’re just run-of-the-mill hardcore. The more I listen to FU, the more I realize that Abraham’s snarl is the perfect final ingredient and anything easier on the ears would fail to match the brute force the band plays with.
FU is tough to get a handle on but there's more than initially meets the ear. The guitar work is frenzied and addictive, but No Epiphany starts with a chorus of sirens.
Abraham certainly looks menacing enough but is rather playful live. Anyone who lets a fan pull down hits pants and punch him in the left ass cheek two songs into his set doesn’t take himself too seriously.
I’m guessing band members must really enjoy seeing the hairy crack of Abraham, whose inability to keep his shirt on is matched only by his inability to keep his pants up, on a nightly basis while touring. Evidently his gut doubles as a stage prop, with various fans either poking him in the belly or using it for bongos.
He routinely shares the mic with the crowd and is prone to strolls in the crowd. Meanwhile, the guitars and rhythm section relentlessly pour it on.
The Pixies and the White Stripes are the only other bands I think of that whip through live sets in such a quick fashion. FU capped the night with their venomous Baiting The Public.
(Note to mosh pit jumpers: Along the lines of not biting the hands that feed you, it’s probably a good idea to avoid punching people in the face before jumping off the stage. Fellow fans will be more inclined to catch you.)
Clearly, FU is happy to skip along on its rampage. They'll leave sorting out the collateral damage to everyone else.
Various issues had us missing most of AV Murderer. The opening act, Boystown, had a great sound ruined by one guy that can’t sing and Rich agreed with my opinion, but it wasn’t unanimous:
Me: That guy in the red can’t sing.
Fellow fan: He’s a good friend of mine. I like the way he sings.