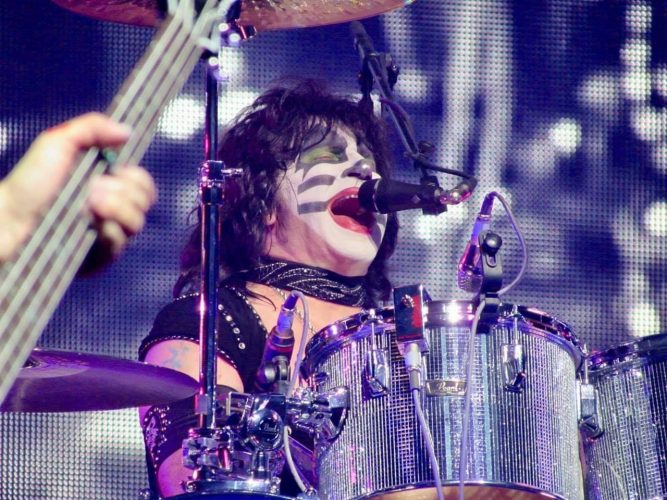 Peter Criss was the first Kiss drummer, but the band changed three drummers in total by this day. Criss was replaced by Eric Carr, after whom came the final Kiss drummer – Eric Singer.

Each of the Kiss drummers is now a rock legend due to the band’s huge success. They became widely famous thanks to their original style, exciting performances, and superb music.

They quickly rose to the top and stayed there by this day. The band’s formation changed throughout the years, and the last crew has been constant since 2002.

The drummer’s position suffered a few disturbances, with some members coming and leaving the band several times. Let’s see what happened with the drummers of Kiss during the long lifespan of the band.

Who was the first drummer for Kiss?

Peter Criss was the first drummer for Kiss. He was also a vocalist for the band and co-wrote some of the songs. Criss was with the band from the begin, and created the face-paint mask called “The Catman.”

Kiss is known for its legendary make-up designs that the crew was wearing all the time, representing a different character or persona. The original four designs: the “Starchild,” the “Demon,” the “Spaceman,” and the “Catman.”

Criss’s story with the band is quite complicated. The first time when he left the band was in 1980. His bandmates said he was fired, but Criss said he wanted to do his own thing apart from heavy metal. However, in 1995 Criss reunited with Kiss to perform on MTV Unplugged.

Later on, he performed with Kiss on the reunion tour, and the reunited group released the album “Psycho Circus” in September 1998. Criss abruptly departed the band again in 2001 because he and the band could not agree on his contract salary.

Who died from the band Kiss?

Second drummer for Kiss, Eric Carr, who replaced Criss in 1980, died in 1991. Carr’s real name was Paul Charles Caravello. When he joined the band, he took the stage name “Eric Carr” and chose “The Fox” persona.

He was a member of Kiss until his death on November 24, 1991. Eric Carr died from heart cancer at the age of 41. Carr was a big fan of the drummers Ringo Starr, Ginger Baker and John Bonham, who inspired him.

He will be remembered as a powerful, hard-hitting drummer and one of the first drummers who used the classic 1980s snare drum sound. Carr’s last public performance with Kiss was at the MTV Video Music Awards in September 1991.

He died soon after, on the same day as Freddie Mercury, the legendary singer of the band Queen. Carr was replaced by Eric Singer, who is the Kiss drummer currently.

Who is Kiss drummer now?

Eric Singer is the Kiss drummer now, being in the band since 1991. He officially became the drummer for Kiss for the first time after the death of Eric Carr. Singer stayed in the band until 1996, when the band reunited with original drummer Peter Criss for the tour.

Singer returned once again after Criss’s second departure in 2001 and stayed in the band ever since, with a short break between 2002 and 2004. He took the “Catman” make-up and costume, which caused some controversy because it was the character Criss initially used.

Where is Eric Singer from?

Singer’s real name is Eric Doyle Mensinger, and he is from Cleveland, Ohio. His father was a local leader of the band who played around the area and on the cruise ships.

Being around the music since he was born, Eric started playing the drums at an early age. His dad took him to see concerts, and he found inspiration in bands like The Who, Led Zeppelin, Black Sabbath, The Beatles, and Queen.

He was influenced by the drummers like John Bonham, Keith Moon, Cozy Powell, Roger Taylor, Bill Ward, and his favourite, Buddy Rich. Before joining Kiss, Singer played with several bands as a touring drummer, such as Black Sabbath and Gary Moore band.

How much does Eric Singer make?

Eric Singer got his fair share of the band’s success, and his net worth is 15 million dollars. As Kiss is one of the most famous and successful rock bands in the world, the band members earned fortunes.

They sold over 100 million albums worldwide, and with 30 gold albums, they are one of the top-selling bands of all time. In Kiss, the riched guy is Gene Simmons with 450 million dollars net worth.

What happened to Eric Singer from Kiss?

After leaving Kiss in 1996, Singer slowed down. However, he still wanted to continue playing, so he toured with Queen guitarist Brian May.

Eric Singer had many side projects and played with different bands over time. When not touring with Kiss, Singer played with Alice Cooper’s band in 2000. Also, he developed his own “Eric Singer Project.”

It was such a rollercoaster with the drummers coming and going, but since then, Singer has been playing the drums for Kiss as their permanent drummer.

After the Rock the Nation 2004 World Tour, Kiss performed only a few shows during a couple of years and took a small break. However, in 2008 they started a big tour, headlining the festivals and their own shows. It was like they never left since they played for a record audience of about 400,000 people.

The band announced their last tour in 2019, which should last until 2022. All three Kiss drummers carved the path for the band’s success, and each of them has a unique contribution to the music. Each of them will be remembered as the legends of their sound and extraordinary musicians.