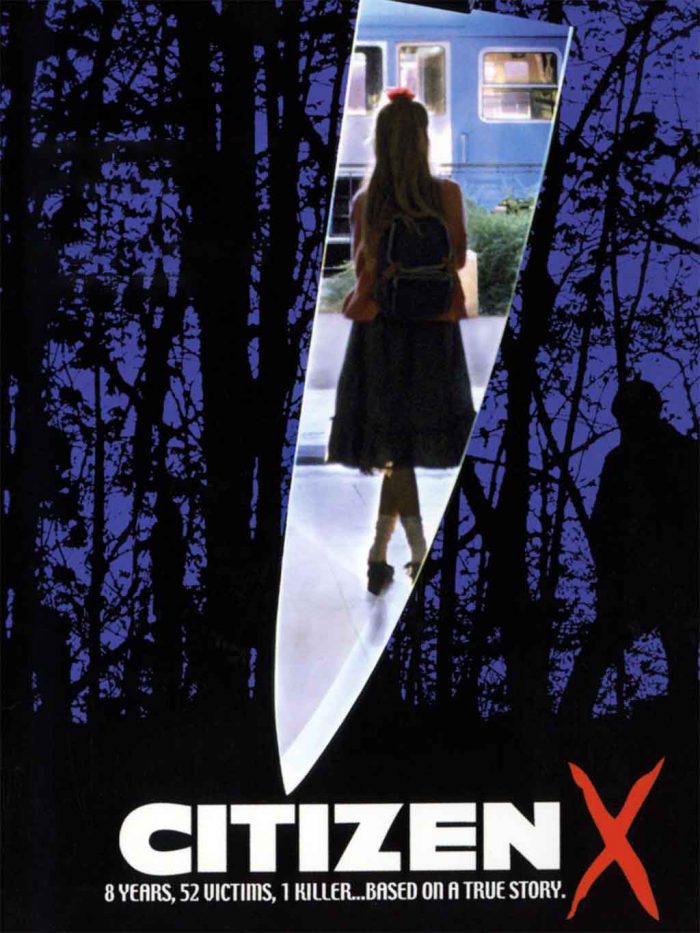 In theory, Citizen X focuses on the discovery, prosecution, and capture of “necro-sadist” Andrei Chikatilo, a serial killer who claimed 52 victims whose raped, stabbed, beaten, and chewed-on corpses were found strewn through the woods and fields often years after they were killed.

Although this movie avoids the adventure-style police drama with lots of gore, violence, and endless car chases, it turns instead toward a study of the men who captured Chikatilo, and in doing so follows the standard horror movie format: man overcoming man in order to recognize and address danger.

We see the conflict between the administrator Mikhail Fetisov (Donald Sutherland) who knows the Soviet system is worthless but works it through deception because otherwise nothing would get done, and young robotic scientist and idealist Victor Burakov (Stephen Rea) who chafes at the insensibility of the system to an obvious horror within.

As tends to happen in such films, the two gradually come to understand each other and cross the lines they have set up for themselves in order to accomplish the impossible, naming identifying a serial killer in a State that insists such things do not exist and would rather round up pedophiles and homosexuals.

Citizen X covers all of the relevant details of the case, sometimes combining multiple events into single scenes for efficiency, including the major hangup in focusing on Chikatilo, whose proclivities were known from an early date, namely the non-secretor status of the suspect:

What was not realised at the time was that Chikatilo’s actual blood type, type A, was different to the type found in his other bodily fluids (type AB), as he was a member of a minority group known as “non-secretors”, whose blood type cannot be inferred by anything other than a blood sample. As police only had a sample of semen, and not blood, from the crime scenes, Chikatilo was able to escape suspicion of murder.

Based on a book The Killer Department by Robert Cullen, Citizen X creates a highly emotive script centered on the relationship between two men in their quest to overcome the inertia of the system and catch a killer.

If anything, the movie indicts “the bureaucracy” more than Communism, an intelligent move given how that bureaucracy seems to have hopped shores and come to visit us here, showing how in the climate of fear that tyrants adore, few people will act from fear of losing the status they have already achieved.

Unlike many films, it does a wonderful job of showing the normalcy of such a regime, with people dedicated to jobs, families, and pursuits while trying to dodge the authorities and snitches around them.

Sensibly it avoids too much of a focus on the killings, staging three central scenes that effect the horror without indulging in tabloid-style reenactments, and uses beautiful and melancholy cinematography to capture the sensation of Soviet life.

As Glasnost dawns and Russia changes, the police finally close in on the murderer with the help of psychiatrist Alexandr Bukhanovsky (Max von Sydow) who risks condemnation by his peers to work on the case, capturing Chikatilo and starting the process leading to his eventual execution.

Ultimately this shows us humankind struggling for sanity, both against an overbearing bureaucracy as well as an ideology of conformity and the inertia of people in a system who have given up hope, to find someone who has gone so far into insanity that only force can stop him.