This Week in Classical Music: April 18, 2022.  Microtonal Renaissance: Nicola Vicentino.  Sometime ago we presented an entry about Easley Blackwood, an American composer who wrote 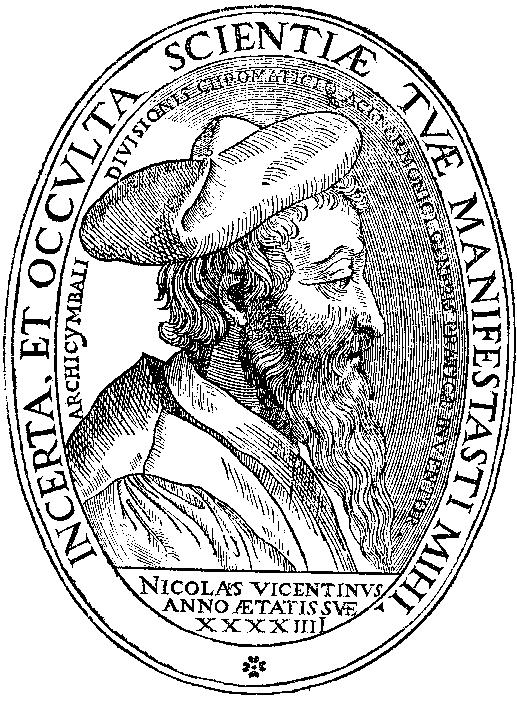 microtonal music, music for electronic instruments tuned to more than 12 half-tones to an octave – 13, for example, or 14.  Blackwood actually tried 12 more tunings, dividing the octave up to 24 equal intervals.  The results were interesting and the attempt pretty courageous, as not that many composers have tried to work in this field.  Well, it turns out that Blackwood had a predecessor.  Four centuries earlier there lived an audacious composer who also attempted to go beyond the usual 12 half-tone octave we are so used to hearing.  His name is Nicola Vicentino.  Vicentino was born, as his name suggests, in the city of Vicenza in 1511.  He probably studied with Adrian Willaert in nearby Venice.  Sometime between 1530 and 1540 he went to Ferrara, Italy’s major musical center.  Clearly, he made a career there, as he became the music tutor to the family of the Duke Ercole II and some of his music was performed at the court.  In 1546 a book of his madrigals was published in Venice.  Sometime later he followed Cardinal Ippolito II d’Este, the second son of Duke Alfonso I d'Este, Ercole’s brother, and the infamous Lucrezia Borgia, to Rome.  There, in 1551, a famous debate took place between Vicentino and the Portuguese musician Vicente Lusitano.  The debate centered on different interpretations of historical tuning systems with references to the ancient Greek music.  It’s too esoteric for us to follow but the idea that such a musical debate could generate interest comparable to that of a Grammy pop-album winner of today is remarkable in itself.  Vicentino lost the debate, which was formally judged by several professional musicians, but that didn’t stop him from writing an influential musical treatise and practically experimenting with his ideas.  One thing he did was to invent a new musical instrument he called arcicembalo.  It was based on a standard harpsichord with two manual keyboards. All black keys were divided in two and there were additional black keys between B and C and between E and F.  The arcicembalo could be tuned differently; one way would divide the octave into 31 equal intervals.  Vicentino wrote music for his new instrument, and for a similarly tuned arciorgano.  He also wrote vocal music using quarter-tones (you can listen to some samples below).  Following Ippolito II, Vicentino returned to Ferrara; in 1563 he left the service of the cardinal and assumed the post of maestro di cappella in his hometown at the Vicenza Cathedral.  His later life isn’t clear: it seems that he spent some time in Milan, applied for a position in Bavaria but didn’t receive it and died during a plague in Milan in 1576.  One of Vicentino’s arcicembalos with 31 notes to the octave is extant, it’s now on display in the Bologna International music museum.

Ensemble Exaudi is one of the few ensembles that attempts to interpret the music of Vicentino.  It’s easier, at least in theory, to sing Vicentino’s quarter-tones and one-fifth-tones as you don’t have to have a very special keyboard instrument, but in practice you have to be a virtuoso performer with an excellent ear to follow composer’s directions.  Here is Vicentino’s Musica prisca caput.  Listen carefully!  And here is his Madonna, il poco dolce, another remarkable piece.  And finally, another madrigal, Dolce mio ben.  It’s invigorating to find new music that is really interesting while so much mediocrity is being promoted by our musical establishment.  We look forward to the (hopefully near) future when talented pieces take their deserved place, the place earned by the quality of compositions, not political expediency.