This Week in Classical Music: May 9, 2022.  Monteverdi.  Claudio Monteverdi was born 455 years ago; he was baptized in Cremona on May 15th of 1567.    Monteverdi is one of the most important composers in the history of European music: a “father of the opera,” his music also spanned two different eras, the late Renaiss 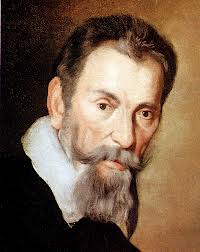 ance and early Baroque; he created masterpieces in both styles.  We’ve written about him on many occasions (for example, here and here), so today we’ll present two madrigals from Monteverdi’s very first Book of Madrigals, which were composed in 1582-3, while Monteverdi was still a teenager, and published in Venice in 1584.  Here are his Ch’ami la vita mia nel tuo bel nome (Madrigal 1) and A che tormi il ben mio (Madrigal 3), performed by the ensemble Le Nuove Musiche under the direction of Koetsveld Krijn.  Not bad for a 15-year-old, wouldn’t you say?

We’ve mentioned Milton Babbitt’s name several times in the past but have never written about him directly and never presented his music.  The reason is that Babbitt’s music is rather difficult, even when the harmonies are translucent, as there’s no tonal base to much of his music: it’s written in a 12-tone, serial style.  Babbitt was born into a Jewish family on May 10th of 1916 in Philadelphia and brought up in Jackson, Mississippi.  His first instrument was the violin, later he studied the clarinet and saxophone.  At the age of 15 he entered the University of Pennsylvania intending to become a mathematician but soon transferred to New York University to study music.

In New York, Babbitt got interested in philosophy and the music of modern composers, the Americans Varèse and Stravinsky and then composers of the Second Viennese school.  After graduating from NYU Babbitt studied with Roger Sessions and then enrolled in the post-graduate studies in Princeton, where he not only studied music but became a member of the Department of Mathematics.  Mathematics came in handy when Babbitt decided to write a PhD thesis in musicology, analyzing Schoenberg’s compositional methods (the name of the paper, The Function of Set Structure in the Twelve-Tone System, was as technical as its substance).  Nobody at Princeton’s music department could understand it and the thesis was rejected.  It was resubmitted on Babbitt’s behalf twenty years later and accepted.  The Dean of the Graduate School of Music explained that Babbitt’s “dissertation was so far ahead of its time it couldn’t be properly evaluated...”   There were other controversies in Babbitt’s life: in 1958 he wrote an article suggesting that serious music requires an educated audience. The magazine, High Fidelity, published it under the provocative title “Who Cares if You Listen,” given to it by the editor, not Babbitt, which was not at all what the composer had in mind.  As he said later, “I care very deeply if you listen. From a purely practical point of view, if nobody listens and nobody cares, you’re not going to be writing music for very long. But I care how you listen.”

Here are Three Compositions for the piano, composed in 1947-48.  It’s the earliest mature piano pieces by Babbitt.  They are performed by the American pianist Robert Taub and, according to the notes, were recorded at the Church of The Holy Trinity, New York, April of 1985 in the presence of the composer.