The Guide to Getting into PJ Harvey, Grunge’s Apocalyptic Godmother 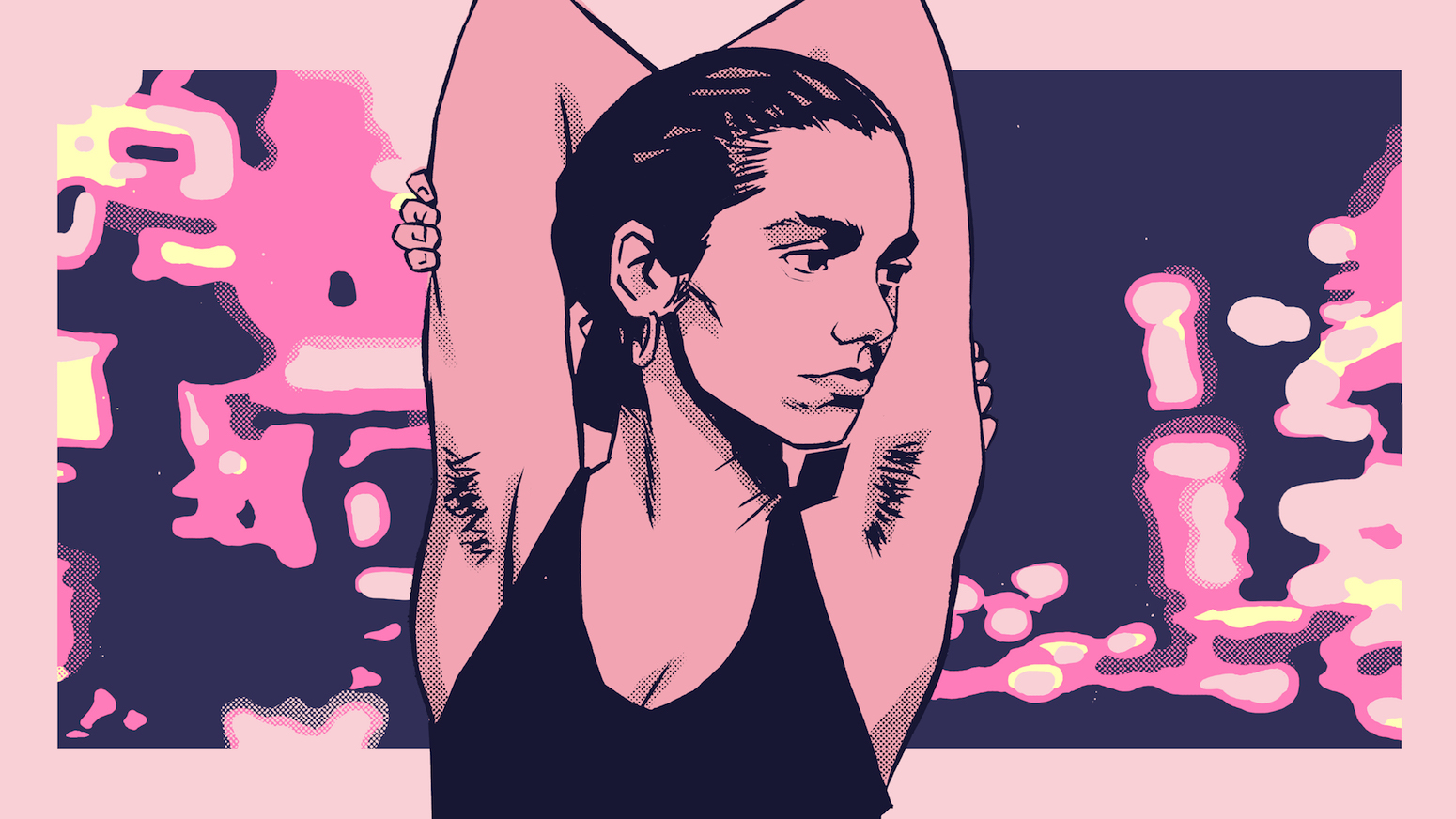 “I can’t believe life’s so complex / When I just want to sit here, and watch you undress.” So sings PJ Harvey on her 2000 track “This is Love”. She’s wearing a whipped cream-coloured suit jacket in the video, tassels dangling off her sleeves, arms cradling an electric guitar. Then she turns to the camera, eyelids cloudy with gold dust, and drawls: “This is love, this is love, that I’m feeling.” It's the sort of thing that makes you want to whisper "what a powerful way to enter the millennium," to yourself.

PJ Harvey—real name Polly Jean—has always occupied a strange place in the music conversation. On the one hand, her influence can be felt everywhere. You can hear her bleak, grey-blue tones in bands like Bat For Lashes and Warpaint. You can see her slash of red lip and low slung guitar in St Vincent and Anna Calvi. Her dark, lyrical style and heavy riffs ripple throughout so many artists' sounds, from Sharon Van Etten to The Kills and Yeah Yeah Yeahs.

But she’s also never been fully embedded within the mainstream. Sure, she’s accumulated a long line of award nominations—seven Grammys, eight BRITS, the only artist to receive the Mercury Music Prize twice. She’s even been appointed an MBE. But you’re not about to see her throwing out gags on 8 Out of Ten Cats, or showing up in the showbiz section of the Mail Online. Her tracks don’t often scrape the top 40, and she’s had one chart-topping album. In that way, she’s neither an obscure/cult figure, nor globally recognized. She sits somewhere in between. She’s timeless, her own force.

Taking a trip through PJ Harvey’s nine studio albums (11 if you count her collabs) is like wading through a black lake at night, if that lake lived inside your soul. She sings relentlessly of water and drowning, of sex and romance, of cities and seasides and nature. Her guitar lines are open and lush; sometimes grungy and pummelling, other times so held back you can barely hear them. Like a poet, PJ Harvey knows how to work with space and tension. “You shoplifted as a child / I had a model's smile...” she sings softly and deadpan in “We Float,” before the whole thing blooms and transforms completely, a new song within a song.

It can be difficult to know where to begin with PJ. She’s been releasing music for years, and inhabited many lives. Before she was PJ Harvey the solo artist, she was PJ Harvey the trio (alongside Rob Ellis and Steve Vaughan), and before that, she was in a band for three years called Automatic Dlamini with now-longtime collaborator John Parish. Even so, listening to her music is less about the individual records, and more about the world she’s created within them; one that was born from the long dewy grass of Somerset, the murky chaos of London and the twinkling high rises of New York. It’s a world that can be playful and darkly unsettling, often at the same time.

Most recently, PJ Harvey contributed two songs (“The Moth” and “Descending”) to the Ivo van Hove stage production All About Eve, which came to an end this month. Last week, she also released track "The Crowded Cell," off her score for Channel 4's well-received Shane Meadows show The Virtues. To mark both occasions—but also just as a tenuous excuse to revisit her back catalog in detail—here is the only guide you need to getting into Polly Jean Harvey.

So you want to get into: Heavy lo-fi grunge PJ Harvey?

In 1995, Alanis Morissette released one of her most well-known tracks “You Oughta Know”, in which she switched up the narrative that women must always be self-contained and leave quietly after facing rejection. Two years before that, however, PJ Harvey released “Rid Of Me” – a dirtier, grungier, angrier version of this exact sentiment. “You’re not rid of me / You're not rid of me,” she sings faux-sweetly over a simple, chugging riff. And then the drums crash in and she’s almost-shouting: “Don’t you wish you never, never met her? / Don’t you wish you never, never met her?”

Some of PJ’s most potent, affecting work is also her heaviest and most lo-fi. There’s a rawness to her earlier albums—especially debut Dry and its followup Rid of Me, released in 1992 and 1993 respectively—that make her music feel as if she just grabbed her guitar in an impulsive rage. At the time, critics tried to shove her under the riot grrrl umbrella—probably because she’s a woman with a guitar who sings about gender sometimes—but PJ never belonged to any scene, and she certainly doesn’t owe much to hardcore punk in America. Her thick, sludgy guitar and loud-quiet dynamics were, and are, more in line with grunge / rock bands like The Pixies, Sonic Youth, and The Breeders if anyone.

By the time PJ released her third album, 1995's To Bring You My Love, she'd parted ways with bandmates Rob Ellis and Steve Vaughan to become a solo act. The album, and its follow up Is This Desire?, sees PJ lean away slightly from those thick and heavy guitar riffs, embracing a subtler sound and inviting electronics into the mix. Not completely of course; this is PJ Harvey. “You ought to hear my long snake moan / You ought to see me from my throne” she sing-screams on one of her heaviest, most rock 'n' roll tracks to date, “Long Snake Moan”, her gravelly voice buried between walls of thick reverb, drums pounding until the end.

So you want to get into: Pop according to PJ Harvey?

Around the release of Stories From the City, Stories From the Sea in 2000, PJ Harvey said this to Q: “Having experimented with some dreadful sounds on Is This Desire? and To Bring You My Love—where I was really looking for dark, unsettling, nauseous-making sounds—Stories From The City... was the reaction. I thought, 'No, I want absolute beauty. I want this album to sing and fly and be full of reverb and lush layers of melody. I want it to be my beautiful, sumptuous, lovely piece of work'."

By “sumptuous and lovely”, PJ didn’t mean she was about to release a bunch of saccharine candy-pop ballads. Rather, in her words, this fifth album is “pop according to PJ Harvey, which is probably as un-pop as you can get to most people’s standards”. The album opens with desolate, stormy guitar while PJ shouts “Look out ahead, I see danger come / I want a pistol, I want a gun” before her voice rises to a melodic falsetto—you can hear that beauty she was speaking about. The tracks throughout this album are maybe more catchy and accessible than her earlier work—“We Float,” for instance, has the most tender, melodic chorus—but they’re still grunge rock. They’re just gorgeous and emotive too.

Later, on Uh Huh Her, PJ Harvey plays every instrument, other than the drums courtesy of former bandmate Rob Ellis. The result is an album she described at the time to Mojo as “very gentle, very loving.” The song “Desperate Kingdom of Love” has the intimacy of something that was supposed to remain a secret, and in “Shame” she sings softly, “I'd jump for you into the fire / I'd jump for you into the flame”, an accordion quietly stretching in the background. None of these are pop songs per se, but a sweetness here permeates even her most vengeful moments.

So you want to get into: PJ Harvey the Poet?

If you cast your eyes across the tracklist for Let England Shake, PJ Harvey’s eighth studio album, you’d be forgiven for thinking it was the contents of an anthology of English war poetry. And fair enough. The lyrics were written long before they were put to music – meaning they’re also basically poems. “Blown and shot out beyond belief / Arms and legs were in the trees,” she sings over sweet, jangling autoharp (which she learned for this record especially!) at the beginning of “The Words That Maketh Murder”, the title of which sounds like a Smiths song, but could also feasibly be something plucked from the works of Wilfred Owen.

Some might not be keen on this side of PJ—there are no lo-fi rock anthems a la 1992—but others regard it as some of her greatest work. So much of this 2011 release is unexpected, masterful and rich with imagery. Where PJ once used vivid, apocalyptic lyricism to sing about her own personal wars—in romance, sex and death—this time she swivels the lens outwards, towards actual wars. “The scent of thyme carried on the wind / Stings my face into remembering,” her voice floats, higher than it’s ever been, over folk strums on “On Battleship Hill”. Before the album’s release she told Andrew Marr that her “biggest fear would be to replicate something I've done before.” It’s a fear she needn’t have worried about.

PJ’s literary energy doesn’t just end with the fact this album—which won her a second Mercury Prize, by the way (the first was for Stories From the City...)—follows the longstanding artistic tradition of turning the bleak, bloody sadness of war into words. She also worked closely with photographer and filmmaker Seamus Murphy, who created a dozen short films around this record. In 2015, the pair collaborated again for The Hollow of The Hand, PJ Harvey’s first poetry book, released on Bloomsbury. Like Patti Smith, Leonard Cohen and Nick Cave before her, here PJ is an artist just as appreciated for her pen to paper, as her hand to guitar.

Playlist: "Let England Shake" / "The Glorious Land" / "The Words That Maketh Murder" / "On Battleship Hill" / "England" / "In the Dark Places" / “Written on the Forehead” / “The Colour of the Earth”

So you want to get into: Politically-minded PJ Harvey?

When artists reach a certain stage in their decades-long careers, they often go one of two ways. They either switch up their sound in an effort to stay relevant and match whatever the youths are into (“Let’s just say, I was listening to a lot of grime while writing this album”—aging white rock star, five years after grime reached its peak). Or they essentially give no fucks about any of that, and write about the things that matter to them in that moment, utilising their huge platform and an already engaged audience.

PJ Harvey chose the second route, and her most recent album, The Hope Six Demolition Project, released in 2016, sees her lean further into social issues. The album's title is a reference to the HOPE VI projects in Washington DC, where run-down public housing has been demolished to make room for less affordable homes. Elsewhere, she sings about ethnic cleansing in Kosovo (“The Wheel”) and war-torn communities in Afghanistan (“The Ministry of Defence”). The release drew criticism for responding to issues without offering solutions, but in a twist of events, it also became PJ's first UK No. 1 album—more than two decades after she first emerged.

Sonically, this side of PJ Harvey properly embraces American blues, rock and folk. She uses her actual voice less—there’s no screaming, shout-singing or guttural growls like in earlier tracks – and instead pushes her lyricism and instrumentation center stage. Accordions and autoharps, flutes and saxophones, violins and clarinets, whistles and hand claps... The Hope Six Demolition Project is an explosive euphony of sound and movement. If PJ Harvey started out as a kind of impulsive grunge rocker who screamed her mind, this album sees her step into her current form: a thoughtful storyteller—more interested in the world around her, than whatever lies inside.