'Rocketman' Nails the Link Between Childhood Trauma and Addiction 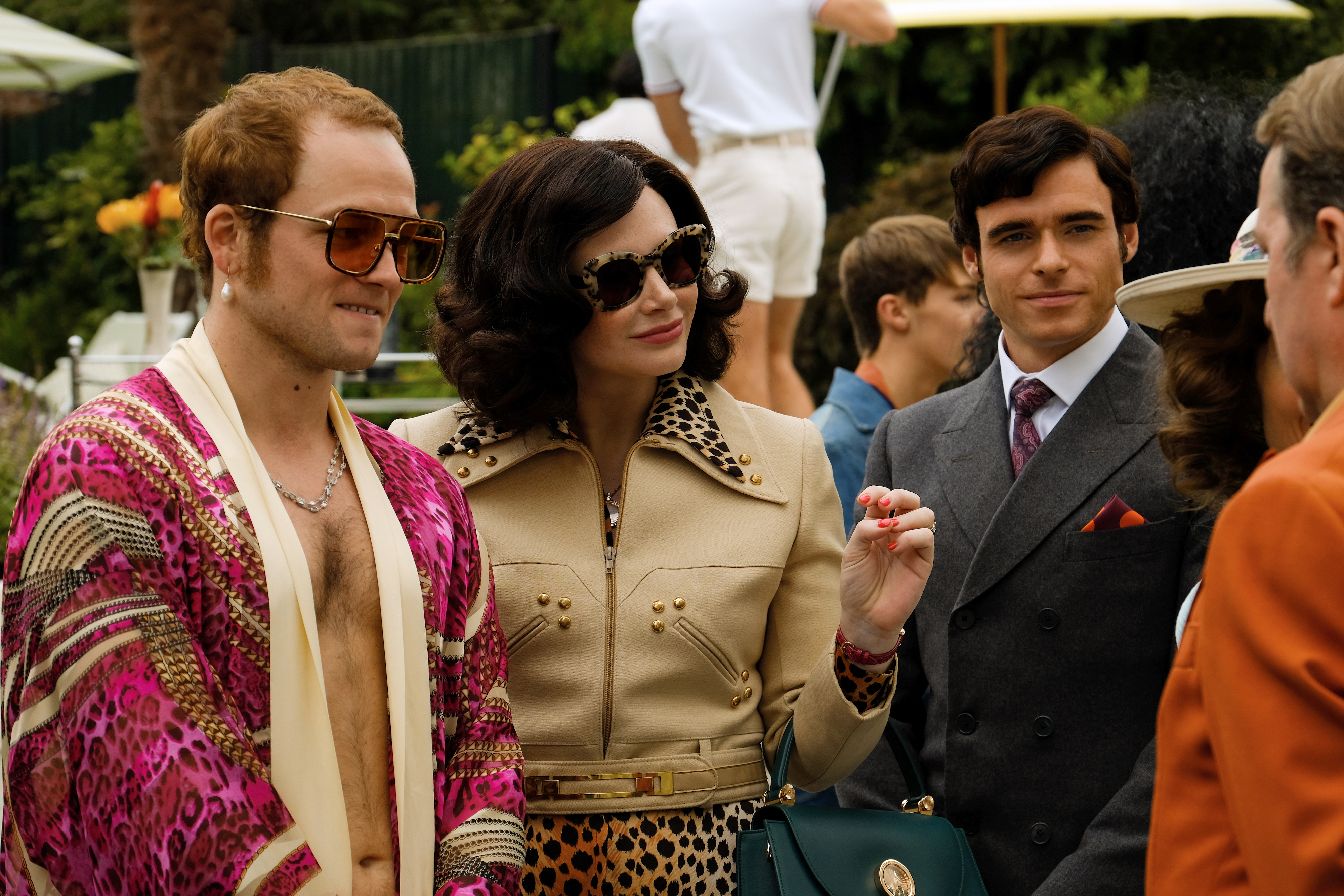 Elton John has done loads of drugs: whole extended train rails and billowing clouds of them. He says as much in new film Rocketman – or at least his character played by Taron Egerton does, when, at an AA meeting, he opens with: “I'm Elton Hercules John and I’m an alcoholic, cocaine addict, sex addict, bulimic, shopaholic…” and so the list goes on, referencing weed, psychedelics and benzos.

This AA meeting is where the film kicks off, where it ends, and how it’s anchored, returned to again and again as Egerton brings us onto the fast-paced merry-go-round-ride that is our John’s life. And by telling the story in such a way, going from pivotal life moment and then back to AA room, director Dexter Fletcher gives us an insight into how childhood and early life trauma can lead to addiction, and how one of the first steps toward recovery is to love and accept your younger self. Hearing from a therapist, and reading work by a childhood development physician beyond the film itself, I learn of a complex portrait that doesn't offer any easy answers on the link between early life and later addiction. But Rocketman still deftly portrays Fletcher (and, to an extent, John's) chosen narrative. 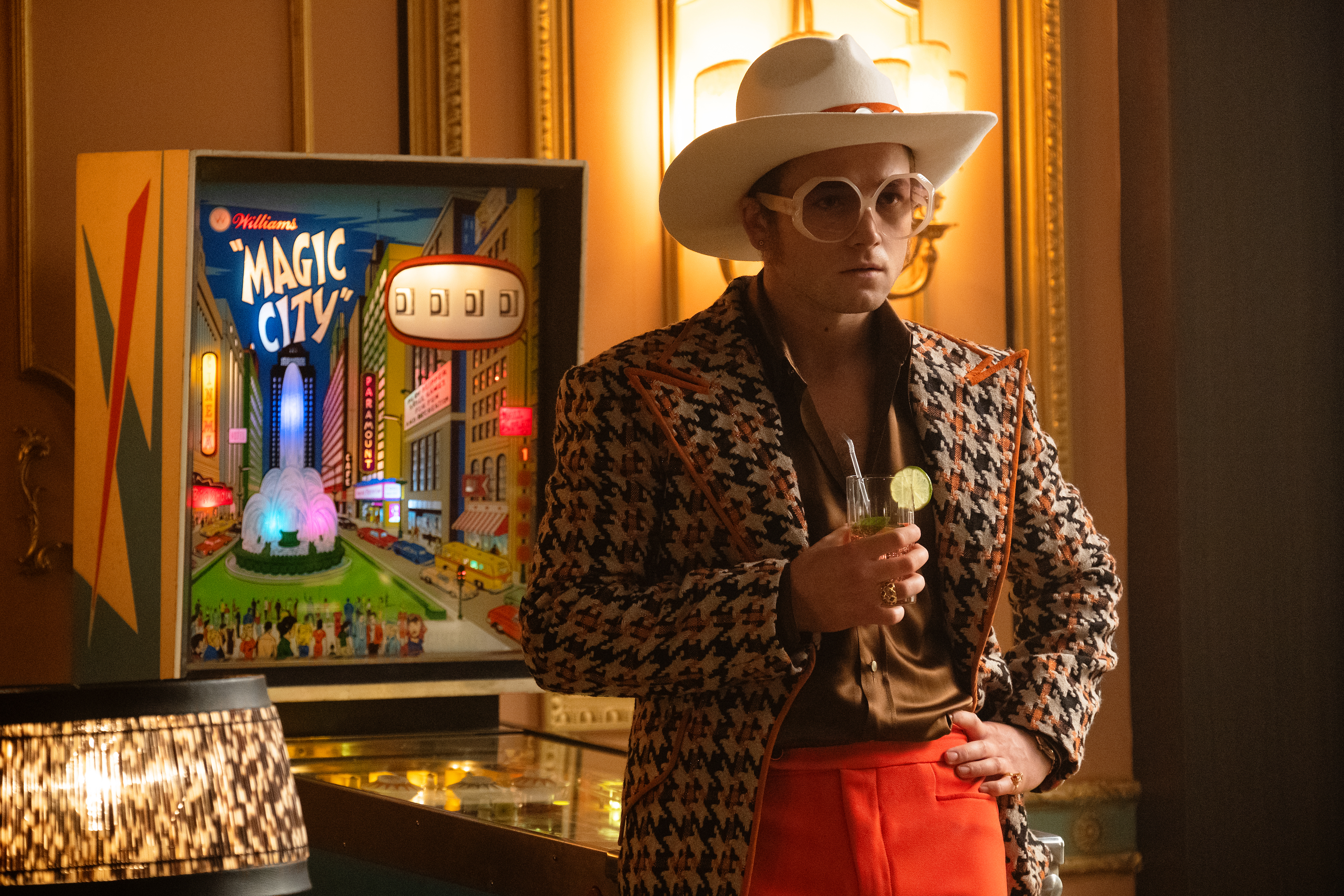 Dr Gabor Maté, author of the bestselling book In The Realm Of Hungry Ghosts: Close Encounters With Addiction, defines addiction as “any behaviour that a person craves, finds temporary relief or pleasure in but suffers negative consequences as a result of, and yet has difficulty giving up.” That could be cocaine, abusive relationships, chocolate biscuits, sleep, sex, love, more cocaine – it doesn’t matter. The cycle is the same: craving, relief, pleasure, then suffering, on repeat.

For both the fictional and real Elton John, the addictive behaviour manifested in drinking copious amounts of alcohol, snorting coke, having sex and all the rest of it. In an interview with Variety earlier this month, John said: “There were times I was having chest pains or staying up for three days at a time. I used to have spasms and be found on the floor and they’d put me back to bed and half an hour later I’d be doing the same. It’s crazy.” See: craving, relief, pleasure, suffering, repeat.

As for what potentially causes addiction, Dr Maté writes: “Childhood trauma is the template for addiction – any addiction. All addictions are attempts to escape the deep pain of the hurt child, attempts temporarily soothing but ultimately futile. This is no less true of the socially successful workaholic, such as I have been, than of the inveterate shopper, sexual rover, gambler, abject street-bound substance user or stay-at-home mom and user of opioids.” 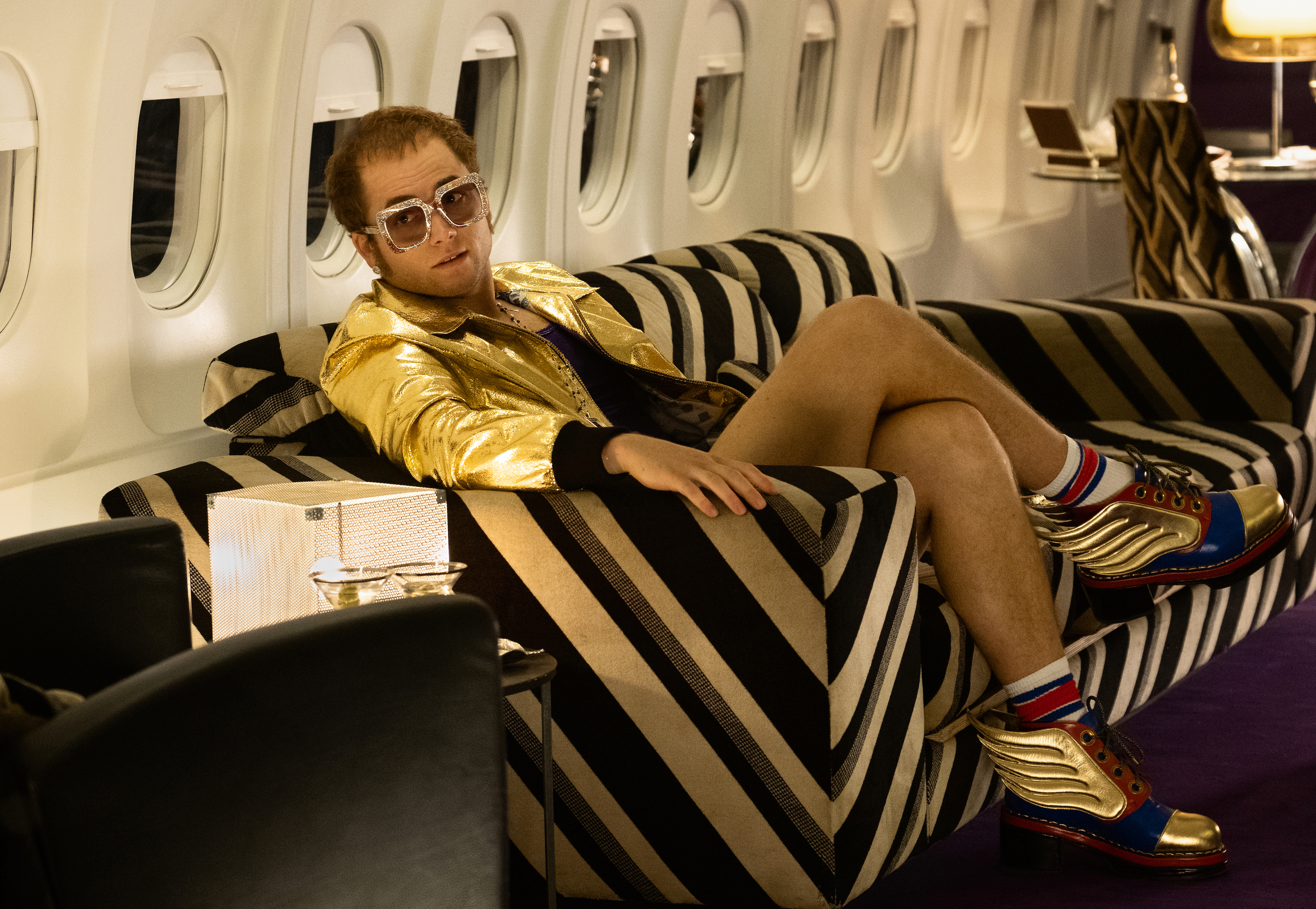 Though Rocketman doesn’t explicitly offer the same viewpoint – there’s no singular moment where Egerton stands up and says “I am addicted to x because of x” – it does go some way to suggesting a similar link: that of the hurt child and the need to escape. The film doesn’t shy away from John’s upbringing: the abuse he suffered from his dad, his parents’ divorce, the lack of a relationship he had with either of them. He also told Variety: “I’ve come to understand – as you get older you understand – the circumstances they went through. I’m not angry or bitter about that whatsoever, but it did leave a scar and that scar took a long time to heal – and maybe it will never heal totally.”

A climactic scene arrives with John’s performance at the Royal Albert Hall. Then dating his manager John Reid (played by Richard Madden), who sits alongside him in the car, John asks that they pull over, as he’s desperate to make a phone call. From discussions with Reid, who wants their relationship to remain private, it’s clear John’s been longing to come out to his family, that it’s been eating away inside of him, and so he runs to a phone box and calls up his mother.

But she ruthlessly tells him through seething teeth that he’ll never be loved, and he breaks down; then moments later Reid appears and punches John in the face, telling him to never pull a stunt like that again, especially not before a show. Though there’s no evidence to suggest it’s anything but a fictionalised account – John and Reid split up in the late 90s, for example, long after the events in the film claim – we do see the effect of these tragic events on the fictional John.

From then on, where before he was looking for love, Egerton’s Elton John is an antagonistic whirlwind who’ll hoover and drink up anything. He smashes pints of vodka for breakfast and blacks out for several days at a time. Coming so soon after the previous scenes, it’s easy for viewers to surmise his antics as a response to trauma and a way to momentarily escape its pain; to forget the hurt of coming out, then being told he’ll be alone, and then being greeted with a punch from his-then boyfriend-and-manager, who later makes it clear he’s less a lover and more a business partner. 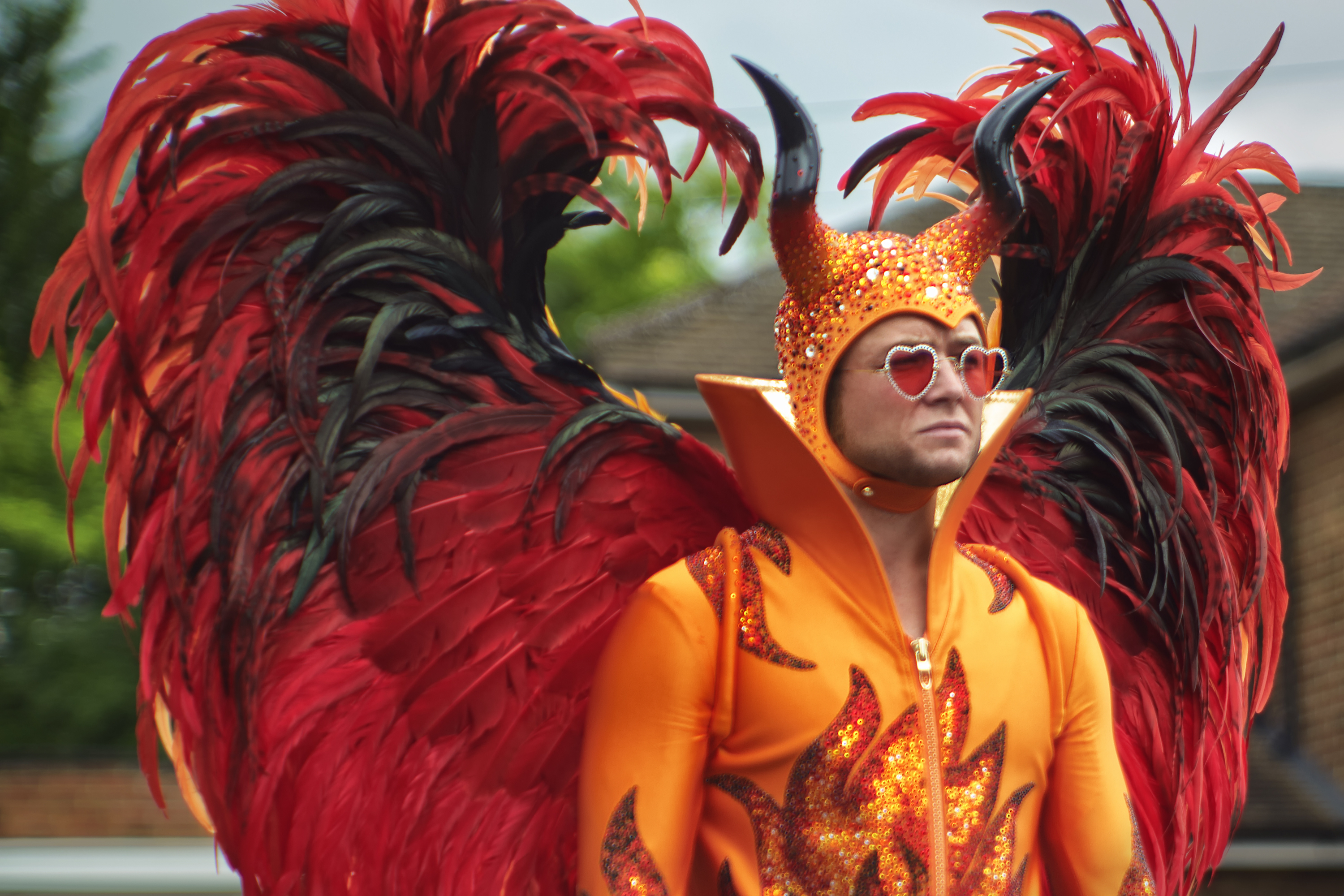 As these and other moments of great pain are told through the medium of the AA meeting, Egerton strips down – starting at first in one of John's infamous on-stage outfits (pictured above); next: glumly taking off the devil ears; and toward the end, plainly dressed, perhaps as Reggie Dwight (John’s birth name). It’s as if shedding those layers is symbiotic with John understanding the root pain behind his addictions. Then, as ghost-like apparitions of his mum, dad and nan appear, and then his younger self, who he hugs, it’s suggested that acceptance is the first step to moving forward. That through the process of loving what Maté calls “the hurt child”, you can start to heal.

John has been sober now for close to 30 years. The film isn’t a strict re-telling of his life: as well as the bits involving John Reid, he plays his first show in Los Angeles and through various music and dance numbers it’s accepted that there’s a strong element of fantasy – people don’t fly through the air. But from Fletcher’s direction, we do get a sense of the link between past pain and present addiction. It's worth mentioning, though, things aren't black and white – London-based therapist Jessie Higney tells me over email that "a traumatic childhood is not equal to later addiction or disruptive behaviour"; one does not automatically create the other. She goes on to say that acceptance also "needs to be understood as a process and not a destination". Basically: it's an on-going undertaking, and not something solved in a single AA-meeting, as the film seems to show.

Still, as it goes, Rocketman's approach to addiction is one of its greatest triumphs, and what sets it apart from other music biopics. On one hand it’s sensationalised, like a lot of music films; yet on the other, it’s honest to an experience anyone can have – celebrity, school teacher, teenager or rockstar.