For K-Pop Fans, Devotion Can Come at a High Price 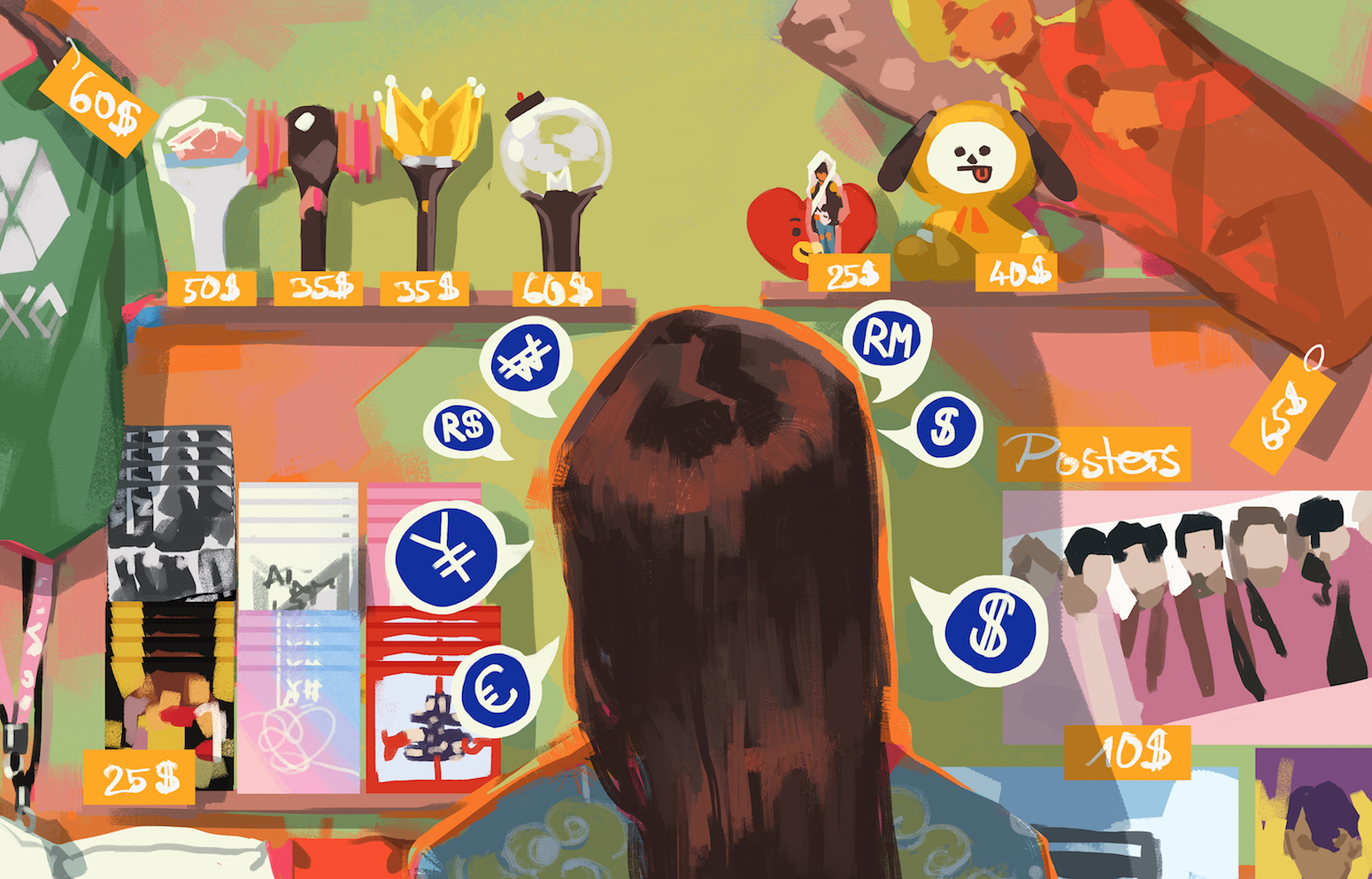 Welcome! This is a column where I’ll be talking about the many sides of K-pop and its fandom, from the perspective of both a writer and a long-time fan. Thanks for reading, and see you again soon, when the idols have next released an unspeakable number of new official things and we’ve responded with 1,000 niche memes.

If you were to sit down, while feeling particularly organised, and map out how much you spend on your favourite bands, where do you think you’d end up? A few quid a month on Spotify? Maybe £80 per month, for one gig involving tedious queuing plus a tee for your Insta stories at the merch stand?

Now, think about it in relation to just one genre. “It's probably close to $350-400 a month on average,” writes K-pop reddit thread user. Another one chimes in: “Right now it's $150, but if my bias has a comeback I will spend more.” Another one: “I would guess I average about $325 a month.” When it comes to Korea’s ever-growing pop landscape, any number below three figures feels like a myth.

Obviously money plays a part in stanning artists from all genres (you could probably fill a house with Fenty Beauty or Yeezy products alone). But in the world of K-pop, it’s especially acute. In a feature for MTV last month, journalist Cat Kelley wrote about the US-based fans literally spending thousands on flights, concert tickets and multiple-day K-pop conventions – with many working two or more jobs to make it happen.

But what makes K-pop in particular so money-orientated? As Kelley points out, “It’s common knowledge that many Korean acts do not make much money if they haven’t attained the rarified stature of a top-selling group like BTS.” In other words, K-pop acts generally have to make it huge, or they don’t make it at all. This can feed into the idea that spending money on merch and tickets etc isn’t just for your own enjoyment – it’s also keeping your fave K-pop act afloat. That in turn affects the culture around spending in general.

And then, of course, there’s so much stuff to choose from. Unlike other pop bands who might release a few calendars or hoodies, the K-pop content wheel is endless: There are group-specific lightsticks, hair dyes and even cars. Every time a K-pop act makes a comeback – as often as once every handful of months – intricate booklets, posters and collectable photocards come as part of the release package, often with (very high) shipping costs. Basically, if you’ve got enough cash, you can exist in a colourful K-pop utopia of your own making.

But what if you can’t afford that? So much of fandom culture works itself out online. Where and how you choose to spend your cash is often out in public, ready to face the judgment of spectators. That’s where things get messy. Because for some, having a more extensive merch collection, or being seen attending a lot of gigs, can seem like the marker of a “better” or more dedicated fan. Failing to buy the latest release can open you up to being shamed – even in jest – as lack of commitment. All of this tosses together questions of consumerism, micro-generational difference and the line between loyalty and self-conscious stunting. It’s complex, but ultimately fan culture runs deeper than the raw numbers of how much you spend.

Again, this isn’t exclusive to K-pop – money feeds into all fandoms, obviously – but “merch-shaming” in K-pop is a very real thing. Take earlier this year, for example, when young stans were discussing the validity of “older” BTS fans online, who then hit back with some variation of ‘yeah, but we have money’. As one user put it: “We cry into our newly bought BTS merch, we cry listening to our newly bought albums in our new Palisade as we drive to BTS concerts where we buy more merch…” to the tune of 24k likes. This week, BTS fans snaked through huge queues to nab merch from the group's London pop-up shop, before they play Wembley this weekend.

Magda, a 22-year-old BTS, BlackPink and Sunmi fan from Russia, has seen a more extreme type of shaming behaviour encouraged by the admins of an unnamed K-pop page on Russian social network VK. Their online community holds about 10,000 followers most of whom, she says, are young teenagers. “These admins are pushing the inherently classist agenda that those buying off-brand merch and not owning physical albums are less valuable as fans,” she tells me over Twitter, after clarifying how getting official merch in Russia is often quite difficult due to extortionate shipping costs.

According to Magda, the attitude that ‘money equals real dedication’ is also spreading to certain parts of the Russian K-pop fandom on Twitter. “You got two goddamn months to save up and order the freaking lightstick – don’t you dare lie [sic] if you found the money for the gig, then you'd find it for the lightstick during this time,” reads one since-deleted Tweet, translated by Magda, the user responding to some fans’ decision to buy an unofficial NCT lightstick, rather than the more expensive version sold by SM.

“It's how I sleep at night knowing that if my faves disband it wasn't my fault,” a Reddit user wrote two years ago, when asked why they buy K-pop albums. “I eye-roll so hard when there's an outcry of people blaming companies for disbanding groups and for flopping [when] they spend $0 on them,” they added. On Twitter, a curiouscat question sent to one user last year reads: “You call yourself a fan and you have ONE BTS album? (that you probably stole from your local target LOL) broke bitch”.

Obviously, a very ~online~ sense of humour runs through thee tone of those posts. But it manifests in darker ways IRL too, even unintentionally. K-pop fansigns, for example – an events where fans get to meet their idols face to face – usually work on a lottery system, meaning that those who've bought multiple albums have a higher chance of getting in. Some stans end up buying more than 40 copies for the vague possibility of being chosen. Fans themselves can then come to internalise the pressure to own everything, believing that not being able to afford merch equals missing out on a fundamental part of the fan experience.

“I think younger fans especially feel a lot of pressure to ‘protect’ and support their faves by constantly engaging – be it with buying merch or tweeting and streaming,” says Bora, a 31-year-old K-pop fan from the UK. “Pace yourselves a bit. You don’t have to do everything, watch everything or buy everything. Do as much as you can – to be a true fan or to love them doesn’t mean you have to give up yourself.”

Despite this pressure, K-pop stans can regularly find ways to get around the high costs of merch. Some make their own, while voluntary community managers organise bulk orders so that shipping costs are lowered. Fans with multiple copies of albums have been known to do Twitter giveaways (mostly genuine, sometimes not), or share paid streaming accounts with friends and resell tickets at face value.

Plus, as is the case with anyone who’s into music, you can find ways to experience gigs without actually being there – even more so when your favourite groups hardly ever perform where you live. For example, 33-year-old, American K-pop fan Tiffany Marie live-tweeted her first BTS concert back in 2015. “I felt like I had to tweet the concert when it was my turn because I remembered all those ARMYs [the name given to BTS fans] who did that for me,” she tells me now. “That was the thing which carried me through not being able to experience it for myself.”

Spending money on your favourite K-pop act can be fun if you’re able to – but it is definitely not what makes a fan. It’s easy to get swept up in the whirlwind of stan Twitter and endless content, but the fundamental thing to remember is that being a fan should be whatever you want it to be – a time to bond with other people over your favourite artists’ weird trouser choice, or insanely choreographed new video. It shouldn’t be a source of financial stress or bullying – because honestly, where’s the fun in that?

“If your support means being able to stream on YouTube, that’s just as amazing as someone being able to buy an album,” says Tiffany. “Honestly – would Namjoon say ‘You’re not a real BTS fan if you haven’t bought every single one of our albums’? No he wouldn’t – he’d say ‘go to sleep, do your homework. You should support us in the way that doesn’t do you any sort of harm.’”