Several shows into Genesis’ “The Last Domino?” tour last fall, just after keyboardist Tony Banks shifted into the spectral sounds that fill “Second Home by the Sea,” singer Phil Collins got up from his chair at the front of the stage and walked back to sit beside the drum riser. For the next six-ish minutes, he watched intently as the drummer, his 20-year-old son Nic Collins, powered through the song before slowly returning to his seat.

It was a sweet, unexpected moment for the audience and an equally unexpected one for Nic. “He didn’t do that at the beginning [of the tour]. Then one night I saw him stand up, and then I saw him next to me,” Nic told me recently. “I was like ‘Whoa, why are you here right now?’”

Phil Collins, one of the most innovative and agile drummers of his entire generation, was Genesis’ kit-man for almost 40 years until he was hit with a series of nearly head-to-toe health challenges. When he announced that he couldn’t even hold his sticks anymore, everyone assumed that meant that the band’s 2007 “Turn It On Again” tour had been their last—but that was before Nic capably played his way into his dad’s old spot onstage.

On that first night when Phil materialized beside him, Nic braced himself for a few notes on his performance, but it turned out that Phil just wanted to see him play from an angle that wasn’t blocked by the concert toms. He walked back to the riser during the next show, and the night after that, through the end of the U.S. tour. “Now it’s become this thing where I’ll look at him, he’ll look at me, and we’ll give each other a nod and a little smile,” Nic said, adding that his dad “does miss being the drummer, so much.”

Phil wasn’t the only one expectantly watching. Nic has had to shrug off arena-sized expectations since he decided not only to become a drummer but to play the songs that his dad wrote and made world-famous. Of course, there are other sons-of-legendary-drummers who have bashed out their own successful careers—Jason Bonham, Zak Starkey, Rufus Taylor, and Jay Weinberg immediately come to mind—but performing your dad’s music in your dad’s band in front of your dad and his longtime bandmates just requires another level of confidence entirely. It’s like Claude Monet’s kid dropping into the Durand-Ruel Gallery and saying that maybe he’ll take a crack at painting pondscapes too.

“[When I was starting out], the pressure was about my age, if I could handle being a touring musician, and if I was able to deliver every night,” he said. “With Genesis, it’s more complicated. It’s a complicated drum band, and there are 50 years’ worth of fans who want to hear the songs the way they want to hear the songs, you know? They’re not there to hear me improvise.”

In Phil’s autobiography, there’s a picture of Nic as a wide-eyed toddler holding a drumstick that’s longer than any of his limbs. According to the book, Nic started drumming when he was 2 years old—though Nic thinks he was closer to 3. Either way, he’s been playing since an age when most kids are still figuring out their sippy cups. But because time can be unfair, even to drummers—especially to drummers—when Nic was getting old enough to start pursuing music more seriously, Phil was inching closer to calling it a day. He underwent a series of surgeries after his neck vertebrae and nerve endings started to protest his chosen profession, and complications from the complications meant that drumming wouldn’t be an option anymore. (As a poetic P.S., one of Phil’s final outings as a drummer was recording “The Big Bang,” a track that appears on his oldest son Simon’s debut record.) 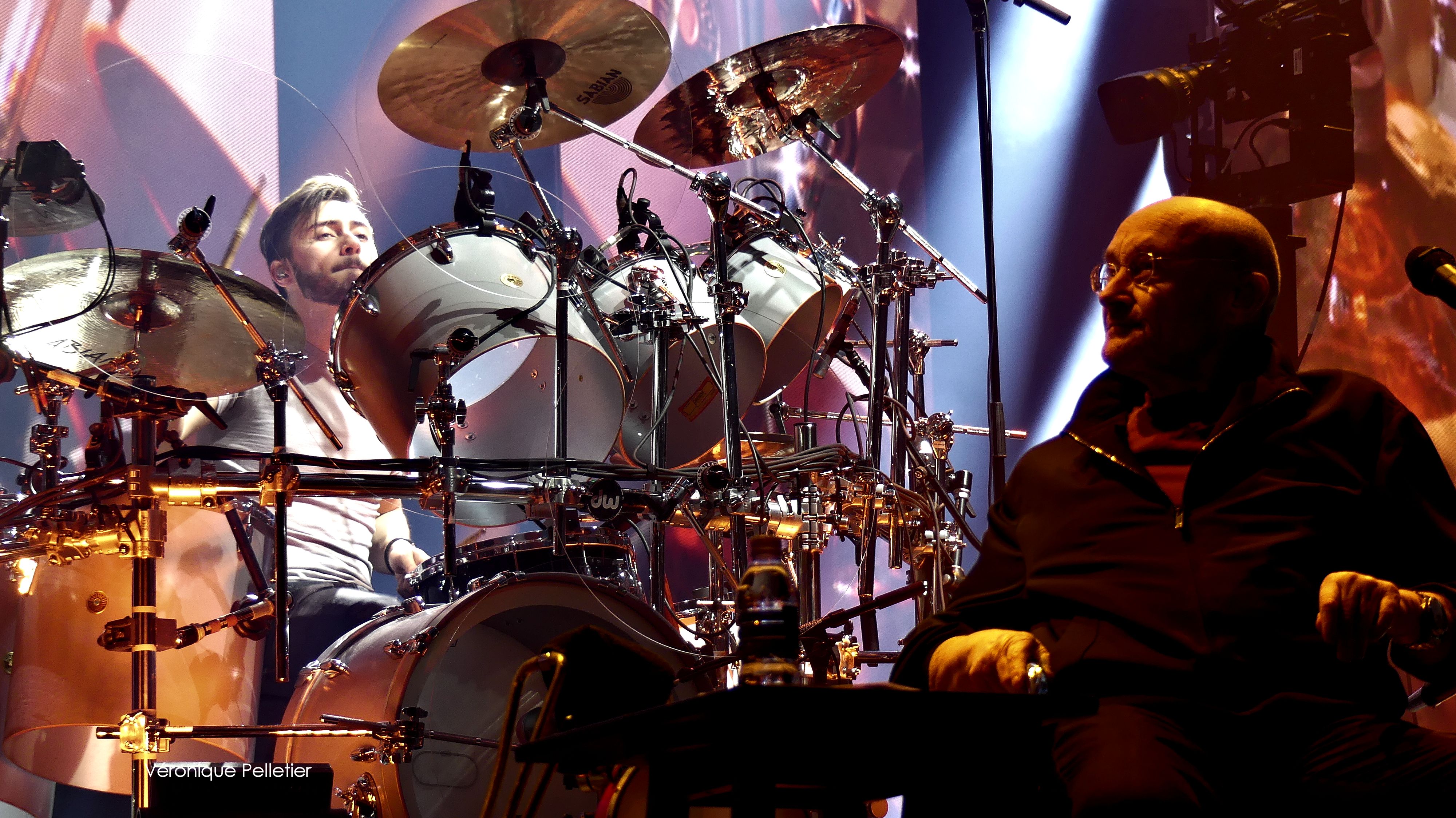 Almost six years ago, Phil was coaxed back onstage to sing, just sing, during a benefit show for his Little Dreams Foundation, and he asked then 14-year-old Nic if he’d like to sit in on drums with the band. Nic did a handful of songs—including “In the Air Tonight,” with its way-past-iconic fill—which led to another couple of charity shows and an appearance at the U.S. Open before Phil invited him to play all 97 dates on his sprawling three-year, four-continent “Not Dead Yet” tour.

“That first show (at London’s Royal Albert Hall), I was really nervous,” Nic admitted. “I had never played in front of that many people and had that level of expectation on me. We had a month or two of rehearsing before the tour started, but it’s so different to rehearse it than to actually play in front of real people. Once we kicked it off, [playing] Hyde Park was a bit of a pinch-me moment. I just felt like, ‘I can’t believe this is happening right now.’”

That’s about when the elder Collins started offering gently hopeful hypotheticals about the idea of a Genesis reunion. “I did mention to Tony very quietly if we did anything again it would be with Nic on drums,” he told Rolling Stone in 2018. “He kind of didn’t say no.” And in his book, he was even blunter: “A billion-dollar-payday offer to re-form Genesis wouldn’t get me back on the road,” he wrote. “A chance to perform with my boy might.”

Only the group’s manager and their accountants could say how many zeroes were involved, but the door to that long-awaited reunion may have been nudged open with the neck of Mike Rutherford’s acoustic guitar. The Genesis guitarist/bassist’s other band, Mike + the Mechanics, was the opening act for several dates on the “Not Dead Yet” tour, and when he joined Collins onstage in Berlin to play the Genesis hit “Follow You Follow Me,” the rumors (and straight-up wishes) about the band reuniting got even louder. When the tour ended in late 2019, Collins, Rutherford, and Banks met in London.

“I knew that they were going to talk about getting back together,” Nic said. “After that meeting ended, my dad said, ‘Do you fancy being the drummer for Genesis?’ And I was like ‘Absolutely, I fancy that! And that’s really when it started.”

Back in the summer of 1970, 19-year-old Phil Collins drove from London to the lush Surrey countryside to then-Genesis singer Peter Gabriel’s parents’ house to audition for the band. He played “The Knife” and a couple of other songs from Genesis’ upcoming release, Trespass, with Mike Rutherford and Tony Banks. And in January 2020, 18-year-old Nic had his own audition of sorts in a rented space in New York City, playing Genesis’ “No Son of Mine” and “Land of Confusion” with… Mike Rutherford and Tony Banks.

“For me, it felt like an audition,” Nic admitted. “For everybody else, it was more like, ‘Can we still play these songs?’ and ‘Will it sound good?’ We were rehearsing just to see if it would work. And then a week after announcing the tour, COVID changed the world, you know?”

The tour dates were scheduled, rescheduled, and rescheduled again, but the extra lead time gave Nic time to dig into the Genesis catalog and to decide whether he’d take his inspiration from the studio versions of the songs on the setlist, or from some of the equally well-regarded live versions. He also figured out how he’d compensate during the sections of certain songs that had been played by two drummers—Collins and longtime touring drummer Chester Thompson—during previous Genesis tours.

“My style of drumming is a bit more rock, a bit closer to my dad’s style in the late 80s and early 90s. Tony and Mike have said that it sounds like my dad playing on (1992’s) ‘We Can’t Dance’ tour,” he said. “But there were songs where I had to put on that Chester Thompson hat and be like, ‘This needs a bit more swing.’ It was really about finding that balance, especially on some of the songs that are 50 years old now. We were rehearsing ‘The Musical Box’ off of Nursery Cryme, and I was playing it in a very prog way and after we finished, Tony looked at me and goes, ‘I think that was great, but can you make it not sound like 1971?’”

The tour was by all accounts a success, with a string of sold-out shows in the UK, the US, and Canada, and praise for Nic’s drumming from concertgoers, YouTube commenters (!!!), and the dudes whose opinions really mattered. “It’s a bit like almost having Phil behind the kit again,” Rutherford told the Toronto Sun. “[Nic’s] his own person, but to have someone back who’s playing songs like his dad wrote them is really great fun for me and Tony,”

On top of that, Nic was nominated in MusicRadar’s year-end polls for the Best Rock Drummers and the Best Prog Drummers of 2021, and finished in fifth and second place, respectively. “Drummers, we love to make lists and to talk about who’s better than who. But just being recognized on that level was a big deal to me,” he said. “I don’t necessarily think I would agree with the progressive list though. One of my heroes, Gavin Harrison (of Porcupine Tree) was, like, fifth, and I felt like that should not be the way it is.”

Now that he has a few weeks back home in Miami, Nic is reconnecting with the members of Better Strangers, the latest incarnation of the band that he started with bassist Yannick Waingarten when they were high school freshmen. They recently released their first EP, Luna’s Daydream, a confident five-song set that includes the standout opener “Lies” and the muscular but melancholy “Change.” (The video for “Change,” which is made of home video footage of the band members, includes a quick shot of toddler Nic sitting on Phil’s lap, happily hitting the drums.)

“There are always different phases and cycles you go through as a band and what you sound like,” he said. “For me, after playing with Genesis, the progressive side of things has not even intentionally become part of our songs. It’s a constantly evolving thing, which is what makes being a band fun.” (If you ever want to kill an hour, ask a Genesis fan—and I’m including myself here—for their thoughts about the evolution of that band’s sound. Actually, you’d better have two hours.)

In March, Nic will rejoin Genesis to make up almost a month’s worth of COVID-canceled dates in Germany, France, and the Netherlands, before returning to London for what could—could!—be the group’s last three shows, ever. “As I started getting into the Genesis material, I found myself becoming a real fan of the band,” he said. “It’s honestly been such a treat for these past two years, whether we were in rehearsal or on stage, to be able to share those moments with them, to share their kind of goodbye. It’s been special to have that with the band, and it’s been special to have it with my dad.”