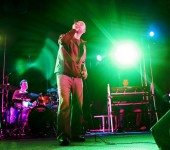 If you lived in Pittsburgh, you'd know the story. Every town has its darling band that defines the local scene but at the same time is special, a little alien, a little apart. New Invisible Joy have been around for a bit under 10 years. It was their sound that made you drunk and dizzy in the cozy little corners of this town; Steel City hatched an exquisite songbird but held it captive. It was them who seemed to be always teetering on the brink of national success and never really made it out there - dice of luck and marketing falling wrong, the band's lifeline stretched thin to almost invisible in the past two years. but none of that really matters now.

The (relatively) freshly released Kontakt, long time in the making, is the band's third full length record that takes their already impressive craft up a notch. Don't expect a home-brewed small- time dirty sound, and don't expect stylistic gimmicks or cheap vocal shockers. Hush. It's impeccably crafted music - with enough grace and freshness and force to it to hold its own against the very best. It may seem to satisfy the same hunger that's fed by Radiohead and U2, but there is a difference that possibly was decisive in where the band is today, bigness-wise. New Invisible Joy possess an endearing aloofness like that of newly-earthlings soon after a fall from a secret planet. They learned to play naively solemn pop-rock, but they keep twisting the unfamiliar sounds this surprising way and that, filling with fresh wonder a seemingly uncomplicated commentary on love, loss and all else there is about life and our hearts.

The band is a four/five piece outfit, with a keyboardist added just recently to the lineup; the sound is well glued with bass and drums, but guitar and vocals worth a special lean of ear. Fluid, twining, whimsical, almost operatic at times, John Schisler's voice is a sheer aural delight. Mike Gaydos' guitar is a force to match John's unfailing vocal technique - perfectly articulated even at insane speed, and as perfectly expressive.

New Invisible Joy is a Pittsburgh, Pennsylvania based band known for wowing critics and fans with their unmistakable, Brit-pop inspired sound. The band’s newest release “Kontakt” (September 2007) is being called “a pop rock record that has no business in the local CD section” (Pittsburgh City Paper); “[an album] with the sheen of a major-label record” (Pittsburgh Post-Gazette); and “the band's strongest and most polished album” (Pittsburgh Tribune-Review.)

In 2000, New Invisible Joy’s debut release “Pale Blue Day” was hailed by critics as “an aural masterpiece” (Pittsburgh Post-Gazette) and "inventive, creative, experimental, bold fresh and original - a breathtaking collision of art and music” (Pittsburgh Tribune-Review). Riding the success of Pale Blue Day, New Invisible Joy advanced their buzz among fans and industry with their second release -- an eponymous, limited edition EP that was recorded at Globe Studios and Joe Blaney Music in Manhattan, and produced by Ed Tuton (Alana Davis, Maxwell, Eagle Eye Cherry). With the release of their album "Trust" in 2004, New Invisible Joy once again wowed critics who called the release "a breathtaking album of anthemic pop songs not unlike the one that just won Record of the Year at the Grammys," (Pittsburgh Post-Gazette) and "brimming with melody and confidence - a joyous, easy listen," (Pittsburgh City Paper).

Named Pittsburgh's Best Local Unsigned Band by Citysearch.com; New Invisible Joy has sold thousands of units to date; and has opened for numerous national acts and artists. National festivals they have played include: SurgeFest and X-Fest in Pittsburgh, PA; Locobazooka in Altamont, NY (InsideSessions.com Showcase); the MMC, the PMC and twice at Toronto's NXNE Music Conference where reviewers from Chart magazines ChartAttack.com called their performance "sheer gratification . Excellent.” In 2004, the band was awarded a spot on the “The Best of the Songwriters Hall of Fame New Writers Showcase” in New York City.

New Invisible Joy - And You're Gone