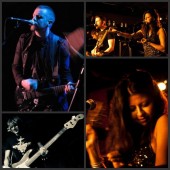 A young Todd Michaelsen came to NYC via the Adirondack Mountains of upstate New York. He had just quit college and knew that he needed to be in a place where things were happening. His goal was to expand his horizons, so he crashed on his uncle’s couch on the lower east side, soaked up music and read every book he could get his hands on while taking in the excitement of the big city. Todd soon found himself hanging out with musicians, artists and DJs in Brooklyn’s burgeoning art rock scene. It was there that he met Reena Shah, a beautiful Indian dancer and actress.

The two became inseparable and quickly moved in together, their blossoming romance punctuated by the harsh reality of living in a cold water flat in a rough neighborhood of Bushwick, Brooklyn. A shared love of music and art got them through this stressful period. They may have been dead broke but they were falling in love and exploring new ideas. Their luck changed when they went to Mumbai to visit Reena’s relatives. It was Todd’s first trip to India and he was amazed by the experience. The couple explored Jain temples and saw live music, dance and the martial arts of Kerala. Indian culture was thriving despite intense poverty, just as they had thrived as a couple despite the hardships of their lives back home in Bushwick. After two months in India, Todd proposed to Reena on a beach overlooking the Arabian Sea.

Upon returning to New York, the couple formed My Pet Dragon as a music and dance duo. Their encounters in India heavily influenced Todd’s songwriting—rock fans and DJs, alike, embraced their debut album, First Born. A remixed version of the song “Dragon Breath” was played on BBC radio and the album and subsequent tour received rave reviews. First Born also caught the ear of acclaimed DJ and producer Karsh Kale, who had Todd write and sing three songs on his 2006 album Broken English and appear on Breathing Under Water, his 2007 collaboration with Anoushka Shankar. Todd and Reena worked together again on 2009’s award winning animated feature film “Sita Sings the Blues,” with Todd composing the score and original songs, and Reena voicing the title character.

All of this activity led Todd and Reena to Producer Stephen George. Blown away by First Born and a demo of Todd’s new compositions, George offered to produce and release the next My Pet Dragon record on his newly formed label, Gimme That Sound Productions. Recorded in a barn located in the Catskills, the new recordings feature Danny Louis (Govt. Mule), Carlos Anthony Molina (Mercury Rev), Carl Jason Molina (Hurricane Bells, Longwave), as well as members of MPD’s current six-piece touring band, Rajeev Maddela, Mario Padron, Vincent Mascolo and Anthony Rizzo. The recordings were inspired by classic and contemporary artists such as Radiohead, Flaming Lips, Smashing Pumpkins, Beach Boys and Neil Young but invoke a unique ethereal sound driven by Todd’s frenetic guitar strum and melodic tenor voice. Combining elements of rock, pop, electronica, folk and experimental music, My Pet Dragon will be releasing a maxi single entitled “Lover in Hiding” in spring, 2010. Subsequent singles and a full-length album are planned for later in the year.

Buy My Pet Dragon on iTunes

FIRST BORN by My Pet DragonThe debut CD, released in 2006

"(My Pet Dragon's) live performance is nothing short of transcendent."

"Todd Michaelsen (a.k.a. My Pet Dragon), hailing from Brooklyn, NY, is a symbol of what threatens the future of the music industry. He embodies the spirit of all talented unsigned artists that push the creative envelope and grow independently. The independent movement is a growing shadow in the background of commercial music."

"Their song-and-dance combination are forceful and stunning."

"melodic but haunting; ambient but also intense. Michaelsen not only gets away with the paradoxes, but forges new territory in blending disparate sounds and influences together into a novel experience." *****(5 out of 5 stars)

Funny Song: Dragon in my Wagon