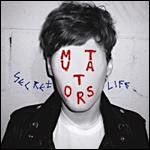 GET THE SECRET LIFE AT RECORDSNOMINAL.COM

7" WITH NEW CAST ON BROADWAY TO BOUNDARY OUT NOW.

12" SPLIT WITH SHEARING PINX ON UGLY POP OUT NOW . ART BY JASON MCLEAN.

From Vancouver, Canada, the Mutators have just released their second 7", and their first with new singer. Having witnessed the band on tour opening for the A Frames and Sexy Prison at the Charred Doghouse here in Davis, I was amazed at how aggressive and imperious her vocals were. Surely, she's the most combative female voice I've heard since.I dunno, maybe Lydia Lunch or Diamanda Galas? She could be almost as quarrelsome, but without the divaesque posturing. The sparse and stark attack of drums and guitar have ratcheted up the ferocity to match the glasseating vokills, and now they're doubly destructive since last year's debut vinyl. This lineup should re-record the "My War" cover. DJ RICK Art for Spastics v. 145

Mutators - The World Is Yours

Mutators - Everything is alike

Mutators - Get It Clean