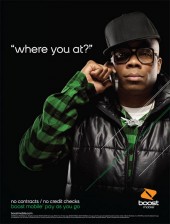 Location:
Poughkeepsie, New York, US
Type:
Artist / Band / Musician
Genre:
Hip Hop
Site(s):
Site
Label:
Thirsty Ear, Warp, 75 Ark, ADORED AND EXPLOITED
Type:
Indie
BioConnections
MF Doom
Bus Driver
Flying Lotus
Autechre
Evil Nine
Suicide
PASE ROCK
Bruce Haack
Vernon Reid
Mantronix
Gary Wilson
Mutsumi
Anti-Pop Consortium
Maurice Fulton
No Dynamics
Hprizm
M. Sayyid
Zano Bathroom
PROLIFIC
RONTRONIK
Accomplished abstract poet. Early architect of electronic-infused beatscapes. Founding member of legendary left-field rap act Anti-Pop Consortium. Childhood Kiss fan. So reads the résumé of the estimable Beans, a New York native raised in the suburb of White Plains.
Born in '71, Beans came of age alongside hip-hop. As for siblings, he had one of each. His mother was a dietician, and though his father succumbed to cancer when Beans was 10, he passed on a library of books and records that his son subsequently devoured.
Rap's echoes came through the radio courtesy of DJ Red Alert. Beans' mother forbade trips to the city to catch Marley Marl in action, but the action eventually came to the 'burbs, as his Bronx-based cousins brought wax with them when they came out to trim the hedges.
Holed up in the seat of Westchester County, young Beans was privy to what his neighbors in Yonkers and New Rochelle were up to. In school, DMX freestyle tapes and Brand Nubian mixes were traded like baseball cards. He'd taken a shine to DJing at 17, but switched to rhyming as it required no equipment.
He'd long been into comic books and drawing, so Beans eventually went to college for fine art. While there, he discovered the burgeoning slam poetry scene, and made a name for himself at the Rap Meets Poetry series in SoHo. That's where the future members of Anti-Pop first witnessed him in action.
As an emcee, Beans has very few peers outside his circle. Within the Consortium, his rapid staccato and distinct lyrical bent – a mix of classic rap braggadocio and fractured new school narrative – helped vault that group into cult and critical favor circa '99 alongside artists from Anticon and Def Jux.
Beans also honed his own beat-making style in the group, citing seminal No Wavers Suicide as his main influence (with nods to Sun Ra, Mantronix, Sonic Youth, Public Enemy and Autechre). Together with High Priest, M.Sayyid and Earl Blaize, Anti-Pop made four albums for labels as acclaimed as Warp Records and Big Dada, opened for Radiohead on the band's Amnesiac tour, and broke up in 2002.
Over the course of three solo albums, Beans mastered his craft. Tomorrow Right Now, 2003, found him laying arty verbal swagger over skronky minimal tracks. Two years later, on Shock City Maverick, he'd doubled down on both counts, sounding more confident, fuller. And on 2008's Thorns, Beans exorcised some spiritual demons, delivering his most personal work to date.
Tours and festivals came, EPs and singles too, and eventually, so did the Anti-Pop reunion. At the same time Beans was working with his old partners on their praised comeback LP, Flourescent Black (2009), he was carefully assembling the bits and pieces that would become his 2010 Anticon debut, End It All.

Beans on Toast - Down The Pub (Live)

Beans on Toast - We Made it to the Waterfall

Beans on Toast - Afternoons in the Sunshine

Beans on Toast - The War On War | Sofar London