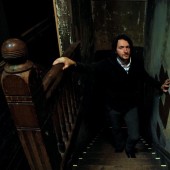 Location:
NASHVILLE, US
Type:
Artist / Band / Musician
Genre:
Progressive / Rock / Indie
Site(s):
Site
BioConnections
Ingrid Michaelson
Cary Brothers
Katie Herzig
Tyler Burkum
Peter Bradley Adams
Jeremy Lister
Kate York
Allie Moss
Sandra McCracken
Trent Dabbs
Movement Nashville
Blood:Water Mission
Harrison Hudson
Micah Tawlks
Peter Barbee
Billy Cerveny
Matthew Mayfield
Allie Peden
Natalie Prass
Ten out of Tenn
Andy Hubbard
Mike Odmark Productions
Kris Donegan
"An articulate songwriter with a versatile and gritty tenor voice -- a combination that has drawn comparisons to everyone from Jeff Buckley to Leonard Cohen -- Matthew Perryman Jones has the touch of a poet and the narrative reach of a short story writer, making the best of his songs deeply resonant." -Steve Leggett (Rovi)
Having just finished his first full length album since 2008, Land of the Living was produced by Cason Cooley (Katie Herzig) and is set to be released on May 29th. This record was fan funded through Kickstarter and raised over $26K in 1 month, 30% over his asking goal. This no doubt conveys an enthusiasm among fans of MPJ's music. Kickstarter backers who received an advance download of the record are already touting this to be Jones' best work to date. Matthew holds nothing back on this record and delivers his most emotional and musically compelling work yet.
Jones began playing out in 1997, debuting at Eddie's Attic in Decatur, GA, but he soon relocated to Nashville. In 2000 he released Nowhere Else But Here followed by an EP, For the Road, in 2003. Released in 2006, Throwing Punches in the Dark was produced by Neilson Hubbard (Glen Phillips, Garrison Star) and met with high critical praise. Jones re-teamed with Hubbard for Swallow the Sea, which was released in 2008. His music has found a home on Film and TV with over 30 placements on shows such as Grey's Anatomy, Bones, One Tree Hill, Pretty Liars & Private Practice.
MPJ has shared the stage with Shawn Colvin, Patty Griffin, Paula Cole, as well as being a staple feature in the nationally acclaimed "Ten Out of Tenn. Collective" with fellow artists, Katie Herzig, Erin McCarley, Butterfly Boucher, Andrew Belle and others. He is currently getting ready to start touring in support of his upcoming album.

out of reach by matthew perryman jones with lyrics

Matthew Perryman Jones | Take It with Me