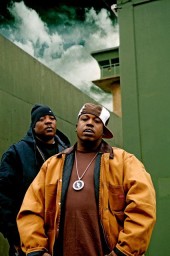 ADD PLACES TO THIS MAP or GET YOUR OWN MAPKIT

M.O.P., short for Mash-Out Posse, is an American hip hop group from Brooklyn. Comprised of rappers Lil' Fame aka Fizzy Womack aka Slap and Billy Danzenie aka Billy Danze aka William Berkowitz, the group is best known for their frenetic hit single 2000's "Ante Up". But throughout their career M.O.P. have consistently delivered the hardest, angriest and loudest music hip-hop could offer. Subject matter is either battling with rival criminals or serious talk about life in the ghetto. A typical chorus in an M.O.P. song is shouting out a line and a response repeatedly. The Mash-Out Posse very rarely make songs with a melodic hook.

Childhood friends Fame (Jamal Grinnage) and Danze (Eric Murray) grew up in the roughest area of Brownsville and were members of a neighborhood gang named Mash Out Posse headed by Fame's older brother, Big Mal. With a desire to express themselves through rap, they formed a group named after their gang. Originally, Fame was the DJ of the group. With the urging on of Big Mal, Fame began to write his own rhymes. Unfortunately, Big Mal was gunned down shortly before M.O.P. debuted. They debuted in 1993 with the single "How About Some Hardcore". The underground success of the single, promoted by a gritty, low-budget video from then-unknown director Hype Williams led to their debut album, "To The Death", a dark and raging LP, was released in 1994 on on the small label, Select Records. The album was fully produced by DR Period. "How About Some Hardcore" became one of the biggest hardcore rap anthems of the 1990's.

In 1996, M.O.P. released their second effort, "Firing Squad". Hoping for better promotion, they signed with Relativity Records. Despite changing record labels and producers (the album was produced by Gang Starr's DJ Premier and Lil' Fame himself), M.O.P. continued hitting fans' ears with tough, menacing beats and their extremely hardcore, energetic delivery. Two years later, M.O.P. released "First Family 4 Life", working on the same formula as ever, again with heavy percentage of DJ Premier's production and more gems produced by Lil' Fame. The album featured guest appearances by Guru of Gangstarr, Treach of Naughty By Nature and Jay-Z. Unfortunately, during this time, both Fame's and Danze's mothers passed away.

M.O.P.'s fanbase was loyal but remained rather small until 2000, when they released "Warriorz", this time on Loud Records. Mainstream radio began playing the first single, "Ante Up", produced by DR Period whom they had not worked with since their debut. The single was a major radio hit and propelled the album to 25 on the Billboard 200 Albums chart. The follow-up single, the self-produced "Cold As Ice" which featured a sample from "Cold As Ice" by Foreigner, also received radio airplay, although almost half of the song's lyrics had to be censored for the radio version. In 2001, a remix of "Ante Up" was released with brand new verses by Busta Rhymes, Remy Martin, and Teflon. That same year, they collaborated on a song titled "Life is Good" with the teen pop boy band Lyte Funky Ones. The song reached 82 on the Billboard Singles chart. Both singles continued the Posse's long-awaited mainstream success.

Unfortunately, "Warriorz" is the last major-label release from M.O.P. to date. In 2002, Loud Records, folded leaving the group stranded. M.O.P. later joined Jay-Z's and Damon Dash's Roc-A-Fella Records. The move appeared to cement the group's future for greater mainstream success. Their first recording for the label was a guest appearance on Jay-Z's album The Blueprint 2: The Gift & The Curse. They recorded three albums for Roc-A-Fella: "Ghetto Warfare", "The Last Generation" and the strangely titled "Kill Nigga Die Slo Bluckka Bluckka Bloaoow Blood Sweat Tears and We Out". But the eagerly anticipated works were shelved and unreleased. In order to keep their music on the streets, the Posse released a mixtape titled "Marxmen Cinema" under the name, The Marxmen. M.O.P. also independently released a self-titled rock-rap album under the name, Mash Out Posse. In 2004, Damon Dash sold his share of Roc-A-Fella to new Def Jam president, Jay-Z, and kept M.O.P. on his new label, Dame Dash Music Group. The group was left feeling uncomfortable with the entire situation.

In June 2005, M.O.P. officially announced their signing with 50 Cent's G-Unit Records, at the same time as Queens rap duo Mobb Deep. 50 Cent is a big fan of the group and has promised the group will finally have the major success they deserve.

M.O.P. Speak On Why They Left G-Unit