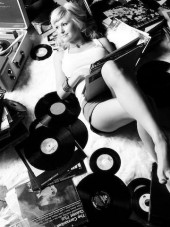 To celebrate the release of Mindi Abair's new album In Hi-Fi Stereo, Heads Up International is giving away a USB Turntable!

Pyle's Belt Drive USB Turntable is the easiest way to convert your vinyl into MP3s. Simply connect to a PC or Mac via USB connection, and use the Audacity to Record and clean up the track, removing hissing and pops. You’re able to preserve your rare and hard to find records. While having the ability to burn CDs with your favorite songs. (ARV $120)

* USB Connection For Conversion of Vinyl to Digital Media

Any artist who takes his or her craft seriously will inevitably reach a point on the journey when history can no longer be overlooked. The direct line between the music of now and the music of then becomes too important to ignore, and the riches of generations past are suddenly rediscovered – and eventually reinterpreted for a new era.

Saxophonist Mindi Abair has reached that critical juncture. After more than a decade of performing, songwriting and recording, she has taken a step back from the more polished sensibilities of contemporary jazz and embraced the sounds of past decades – specifically the ‘60s and early ‘70s, a period widely regarded as the golden age of R&B, soul and funk. The result is In Hi-Fi Stereo, her new album set for release on May 18, 2010, on Heads Up International, a division of Concord Music Group. The album captures the raw and edgy aesthetic of that golden age, when a slab of vinyl could instantaneously put band and listener together in the same room and establish a visceral and enduring connection. Loaded with infectious grooves generated by a high-caliber crew of players, In Hi-Fi Stereo rekindles that spark for a new generation of ears.

“This album is a reflection of some of the older, more funky stuff I’ve been listening to in the last couple years,” says Abair, firing off a list of favorites that include Al Green, Alain Toussaint, Junior Walker, King Curtis, Archie Bell and the Drells, and many others. “I think it all kind of seeped into me over time. I wanted to move away from a more produced sound and just get into the studio and play. It didn’t have to be perfect. It didn’t have to be shiny and new. It’s not an intellectual record. It’s a fun, feel-good record inspired by some of those great sounds and grooves from that period, but recast for a modern audience.”

Co-produced by Abair and R&B mainstay Rex Rideout (who also lays down keyboards on nearly every track), In Hi-Fi Stereo includes a roster of players representing the old school as well as the new. In addition to Abair’s touring band, the album is seasoned with a number of guest players: veteran drummer Steve Gadson (a frequent session player for Bill Withers), bassist Reggie McBride and vocalists Lalah Hathaway, Ryan Collins and David Ryan Harris.

Hanging with talented musicians is nothing new for Abair. Her paternal grandmother was an opera singer, and her father was a saxophonist and B3 player in a blue-eyed soul outfit called The Entertainers – a gig that kept the whole family on the road for several years throughout the late ‘60s and early ‘70s. By the time the band broke up and the Abairs put down roots in St. Petersburg, Florida, five-year-old Mindi had already demonstrated musical aspirations of her own by taking up the piano.

Abair recalls some wise counseling she received during her college years: “My saxophone teacher told me every week, ‘You have to start your own band. Don’t try to be someone else. Don’t practice a bunch of David Sanborn licks or Wayne Shorter licks. Go out and be your own person.’ It was the best advice anyone could have given me.”

She took the advice and ran with it, all the way to the opposite coast. She landed in Los Angeles, where she began a dues-paying process that lasted nearly a decade and included touring gigs with keyboardists John Tesh and Bobby Lyle and guitarist Jonathan Butler. When she was home from the road, she booked her own band in just about any club that would have them. And on those occasions when none would, she played on the streets of Santa Monica. “I didn’t want to wait tables when I had a degree in music,” she says. “I’d take my horn down to 3rd Street Promenade and just play. I paid my rent for quite a few months by doing that.”

Abair released her first album, the independently produced Always and Never the Same, in 1999, while touring with the Backstreet Boys. By the beginning of the new decade, the combination of a nonstop performing and the well-received indie release had helped her solidify her musical identity. “By the time I signed on with Verve in 2002,” she says, “I really knew who I was as an artist. I knew what I wanted to say, and I had a sound that was mine and no one else’s.”

It Just Happens That Way, her major-label debut in 2003, was the first in a string of solo recordings on Verve that also included I Can’t Wait for Christmas (2004), Come As You Are (2005) and Life Less Ordinary (2007). She made the move to Peak, a division of Concord, with the 2008 release of Stars, an album that showcased – more than any of her previous recordings – her attractive vocal work as an engaging counterpoint to her solid saxophone chops.

This combination of highly refined skills takes even more of the spotlight on In Hi-Fi Stereo. The set opens with “Any Way You Wanna,” a lighthearted and funky track co-written by Abair and Stephen “Stevo” Theard. Throughout the track, Abair’s saxophone rides atop a steady backbeat, an understated bass line and subtle but effective accents from Theard and Rideout on keys and Randy Jacobs on guitar.

“All Star,” fueled by a thumping soul riff, was inspired by some of the Motown records that Abair had been checking out in recent years. “It has a really vintage sound to it – a mix of old Motown and maybe some classic Ramsey Lewis, like ‘The In Crowd,’” she says. “You get into the song a little bit and it just turns into this big party. All of a sudden you want to jump up and down and put your hands in the air.”

The swaggering “L’Esprit Nouveau” is a nod to New Orleans keyboardist/composer Alain Toussaint. “The arrangement really focuses on just a few instruments – a saxophone, a ragtime piano, an upright bass – but the track has a great vibe,” says Abair. “It puts you right there in a crusty old club, and you can see the people milling around or having a drink at the bar. You can just feel that atmosphere when you hear this track.”

“Be Beautiful” is a soulful ballad penned by vocalist David Ryan Harris, who shares vocal lines with Abair. The song’s simple, positive message was a big draw for Abair from the get-go. “David has been a friend of mine for years, and I’m such a fan of his solo work,” she says. “I’d always wanted to get him on one of my records, and this was my chance. This is such a great anthem for women, and I really wanted these words to be on this album.”

Abair turns the James Brown classic, “It’s a Man’s Man’s Man’s World,” on its head with the help of Lalah Hathaway’s silky vocal delivery. “Lalah thinks like an instrumentalist, and she has always made her way around a song that way,” says Abair. “So for me, as an instrumentalist, that was ideal. We wanted to record this song as a duet, but we didn’t want to follow the typical structure of one person singing the song and the other person playing the saxophone. We made it more of a back-and-forth experience.”

The set closes with “The Alley,” an instrumental ballad that represents the combined songwriting efforts of Abair’s touring band and spotlights their abilities as a tightly knit performing unit. “We were in a little hippie rehearsal studio called The Alley in L.A.,” says Abair. “We all just jammed together until we came up with this song. Each of us has such distinct musical personalities, but we all got to be a part of the creative process in the studio, and we brought the whole thing to life in a spontaneous mutual effort.”

Start to finish, In Hi-Fi Stereo is something classic and something new at the same time. “It’s a vintage sounding record, a contemporary take on a very classic sound,” she says. “We didn’t make your father’s jazz record. We didn’t set out to make an ‘old’ record. It’s not about doing what’s been done before. It’s about drawing on what and who inspires you, and bringing it into your world and making it your own – and then putting it out there for a new generation of people who love jazz and soul.”

Mindi Abair with Friends live at The Smooth Jazz Cruise 2014