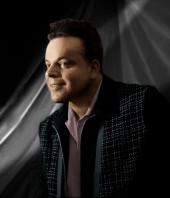 British singer, pianist and guitarist Mike Sanchez is one of the most

exciting and charismatic performers of Rhythm & Blues and Rock 'n'

Roll in the world today. His indelible image as a frenetic front man,

pumping powerful boogie-woogie from the piano in a soaking red suit,

Wyman's Rhythm Kings, fronting the band since 2001 alongside Georgie

Floyd on their annual world tours. The Rhythm Kings released their

Mike is currently involved in a number of recording projects and

touring line-ups, most notably his 6-piece outfit Mike Sanchez and

continuously receive fabulous reviews throughout the blues and

rockin' scenes across the UK and Europe.

& Cadillacs' in 2003 has finally seen a follow up album in 2009 titled 'Babes & Buicks', both albums released on Mike's own UK label and on-line store,

doo-wop vocal trio The Extraordinaires and Imelda May.

Spanish parents Jesus and Manola on the 17th of February 1964. At the

age of eleven, his family moved to Worcestershire in the West

Midlands where Mike took up the piano, developing a strong love for

1950s' American roots music through his high school years. As a

teenager he taught himself guitar and formed The Rockets, a rockabilly

Shortly after, Mike was introduced to former Chicken Shack, Savoy

Zeppelin's Robert Plant, which led to the founding of the Big Town

Mike to his friends Eric Clapton and Amen Corner's Andy

Fairweather-Low. The latter signed up as guitarist with the Big Town

is another good friend who regularly involves Mike in his plans

Mike recorded a number of albums including the classic rockabilly

Playboys had various stints opening for Eric Clapton at London's

Royal Albert Hall and appeared at many European music festivals,

also many times over the years been involved movie soundtrack

producing and recording, most recently for the movie 'I'll Be There'

as he continuously enjoys growing acclaim and admiration for his

electrifying stage performances from new and old fans of all age

groups across the world.

"When It Rains It Really Pours"; Darlington Blues Fest 1999

Rhythm Riot, November 2006: "Girls All Over The World"