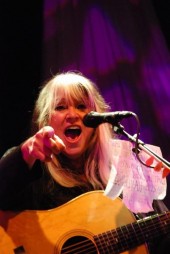 With guitar in hand and a talent that combined amazing vocal equipment, disarming humor, and a vibrant engagement with life, she was booked as the first solo pop/rock artist ever to appear at Carnegie Hall, the Metropolitan Opera House, the Sydney Opera House, and in the General Assembly of the United Nations, where delegates greeted her performances with standing ovations. The top television hosts of the time -- Ed Sullivan, Johnny Carson, Dick Cavett -- battled to book her. (After her stunning performance on his show, Sullivan goggled that he had not seen such a "dedicated and responsive audience since Elvis Presley.")
Accolades rolled in, from critics ("Melanie's cult has long been famous, but it's a cult that's responding to something genuine and powerful -- which is maybe another way of saying that this writer counts himself as part of the cult too," wrote John Rockwell in The New York Times) as well as peers ("Melanie," insisted jazz piano virtuoso Roger Kellaway, "is extraordinary to the point that she could be sitting in front of us in this room and sing something like 'Momma Momma' right to us, and it would just go right through your entire being.")
In the years that followed Melanie continued to record, continued to tour. UNICEF made her its spokesperson; Jimi Hendrix's father introduced her to the multitude assembled for the twentieth anniversary of Woodstock. Her records continued to sell -- more than eighty million to date. She's had her songs covered by singers as diverse as Cher, Dolly Parton, and Macy Gray. She's raised a family, won an Emmy, opened a restaurant, written a musical about Wild Bill Hickok and Calamity Jane
She has, in short, lived a rare life. But all of it was just a prelude to what's about to come.

Carolina in My Mind - Melanie Safka

I Think It's Going to Rain Today - Melanie Safka

MELANIE- LAY DOWN (Candles In The Rain) WOODSTOCK