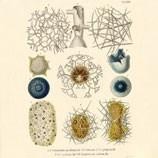 The trio of keyboard/organ/piano player John Medeski, drummer/percussionist Billy Martin, and bassist Chris Wood formed not in some vastly creative alternative universe, but in Brooklyn, NY (DUMBO) in 1991. Medeski and Wood, both students at Boston's New England Conservatory of Music, decided to move to NYC, with the intent to explore the late-night underworld of the city's burgeoning jazz scene.

The trio began experimenting with contemporary hip-hop beats that could swing as hard as jazz rhythms, yet remained essentially simple and propulsive, giving the musicians ample room to create hypnotic texture and sounds that were brimming with both improvisation and harmony.

MMW garnered a loyal fan following through constant touring and eventually secured a record deal. Their debut album "Notes from the Underground" was released in 1991.

In 2008, with over a dozen albums credited to their name, MMW set upon to release an ingenious new experiment, The Radiolarians Series. Radiolarians I, II & III were released individually in a span of 1.5 years and the culmination of the series, Radiolarians: The Evolutionary Set (MMW's first box set) will be released November 24, 2009. The box set will include additional material including a remix album, a live album, bonus tracks PLUS a documentary DVD directed by Billy Martin.

I created my layout at KillerKiwi.net