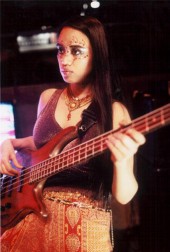 Maximina Juson aka Sonic Sheba was born in the Philippine Islands and at the tender age of 8 months was transported overseas to the United States. A Pan-New Yorker, Maximina grew up in Brooklyn, Westchester County, the Bronx and currently resides in Harlem where she works as a producer, songwriter and bassist. She has been involved in musical genres ranging from the UnCategorizable, Hip-hop, R&B, Electronica, Drum 'n' Bass, and Rock. She has been recognized for her unique voice, a sound which pays tribute to an eclectic past while breathing life into the future.

With the bass guitar being Maximina’s introduction into a life of music, many wonder how she picked it as her instrument of choice. Her answer to that has always been, "I didn't choose it, it chose me." One fine day Hughie from The Fun Lovin’ Criminals asked her a question that changed the course of her life, he wanted to know if she knew any female bass players. At the time she didn’t know any but the question got her thinking.The very next day she took him out to help her pick out a bass. Immediately passionate, she practiced about six to eight hours a day and three years later landed her first professional gig with Natalie Merchant (formerly of the 10,000 Maniacs). Ironically, she had never heard of Natalie but played her first gigs ever on venues like the Z-100 Columbia Radio Hour and The David Letterman Show.

In 2002 Maximina started Jolie FUEGO with singer Alice Smith in which she made her debut as a producer. A unique combination of her immersion in the New York underground music scene, diverse musical tastes, and a year living in London has been instrumental in shaping Maximina’s music concept. She is also working on an album with Caron Wheeler for a collobaration project formerly named Tsunamiii. Five songs from this new project will be featured on a Caron Wheeler Live in Japan DVD to be released in 2005. In addition she is scoring a one-hour documentary film made by Art Jones (The Art Institute of Chicago).