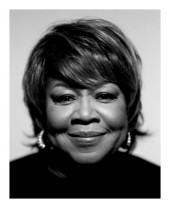 Produced by fellow Chicagoan Jeff Tweedy at Wilco’s studio The Loft, the intimate and textured production showcases the iconic singer at her most powerful and fervent. You Are Not Alone mixes traditional gospel numbers with two new songs written for Mavis by Tweedy, plus her unique interpretations of songs by Pops Staples, Randy Newman, Allen Toussaint, John Fogerty, Rev. Gary Davis and Little Milton.

Arcade Fire - I Give You Power (Official Audio)

Mavis Staples - Why Am I Treated So Bad 6-15-13 Clearwater Festival, Croton On Hudson, NY

Mavis Staples - "Can You Get To That"
▶ View All Videos