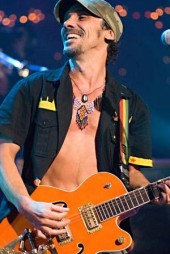 get this EP on iTunes FR, iTunes US, iTunes UK, Virgin Mega, Fnac Music and Starzik

get this EP on iTunes FR,

For U.S. get this EP on Amazon, iTunes, Zune

Manu Chao is a musical globalista with a rebel rock'n'roll heart. It’s that rock’n’roll he’s been making as early as the 1980s as the leader of Mano Negra. His music is multilingual and broadly multicultural, blending rock, reggae, punk, ska, found sounds, and more. The Paris-born, Barcelona-dwelling artist of Spanish descent finds inspiration in street culture and local bar scenes. He has long collaborated with musicians of diverse cultures, as he does in Radio Bemba, the group that has performed with him since Mano Negra disbanded.

Chao completed his most extensive North American tour to date in 2007, following a highly acclaimed co-headline performance at this year’s Coachella festival. The set was chosen as a festival highlight by The New York Times, The Los Angeles Times, and many others, including Pitchfork, which wrote that Chao proved a “the ringmaster of a multicultural, cross-generational, genre-busting circus that can whip tens of thousands of people into a frenzy even if they don't speak the same language.” He is set to tour Europe this fall.

His latest album, La Radiolina, is Chao’s first since the live Radio Bemba Sound System (2002) and his first studio release since Proxima Estacion: Esperanza, which in 2001 topped the European charts and was named one of the best albums of the year by Rolling Stone. Proxima Estacion was preceded by equal fanfare for his debut album, Clandestino (1998), which The Los Angeles Times called “superb.” Clandestino remains one of the best-selling albums in French music history, with more than 2.5 million copies sold to date.

Aside from his innovative recordings, he has earned international praise for his explosive live shows. He performs to sold-out crowds of tens of thousands around the world. Throughout his career, Chao has remained true to his anti-establishment principles and continues to mix music and politics by performing at events that promote anti-globalization efforts.

In the interim since his last album, Chao also earned tremendous acclaim for his work producing and guest starring on Amadou & Mariam’s Dimanche à Bamako, which has sold over 600,000 copies worldwide and was voted one of 2005’s best albums by Rolling Stone, MOJO, SPIN, Blender, National Public Radio and many others. He has also produced others. In 2004, he created Sibérie m’était contée, a primarily acoustic recording with lyrics in French, released with a book featuring drawings by Wozniak.

For the latest on all Manu news, videos, and more – check out www.manuchao.net

Get the 'A Cosa' [Prince Fatty Version] single on iTunes by clicking above. Also available at other US digital music outlets.