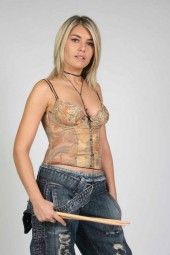 Born in Rome, Italy, I was drawn to music at the age of 5. My father, moved by my desire to learn, and believing in my talent, placed me in the prestigious music schools, where I studied piano. But I soon discovered that my true passion was to become a drummer (my mother was shocked!). I then took intensive courses with such greats as Roberto Gatto and Horacio El Negro Hernandez, and I strengthened my talent by taking numerous workshops with Steve Gadd, Simon Philips and Billy Cobham. In 1989, thanks to my brother Stefano, I embarked on my first tour as a drummer, with Scialpi and Scarlett (vocalist of Boy George and Curiosity Killed the Cat). I then met Domenico Modugno, AKA Mr. Volare, and had the priviledge of performing with him before his death. I subsequently took part in live tours with artists as Mietta & Nek, with whom I performed overseas for the first time @ Roy Thomson Hall in Toronto. I was also the featured drummer in albums as Cambia Pelle, (Mietta), and Tutto D'un Fiato, (Bungaro). I further enhanced my musical career playing live on daily TV programs as "I Fatti Vostri", and I was also chosen to join Riccardo Cocciante's European tour, where we performed in such theatres as the Olimpia & The Zenith in Paris. My recording credits of this time include songs by such artists as Mina, Patty Pravo, Riccardo Cocciante and Tosca. In 1995 I signed a recording contract with BMG / Ricordi and participated in Sanremo Festival, one of the worlds most prestigious annual music festivals, televised to a worldwide audience of millions. Simultaneously, I played live as a singer / drummer in the Red Ronnie's TV shows Roxybar & Help, and as a special guest during Ambra Angiolini's tour. I also took part in "Vigna del Mar", the most prestigious South American festival . In 1997 my brother Stefano and I launched our label and recording studios "Stemma Music & Studios", where we have collaborated with major record labels, and worked as music producers for many prominent artists. I then worked in the U.S. with Jack Daley, Lenny Kravitz's bass player, and at the fabled recording studio Hit Factory in N.Y., as well as Southern Tracks Studio in Atlanta. In Italy I joined one of the most famous artists, Zucchero Sugar Fornaciari, on his promotional tour for the album Blue Sugar. As a result, for 2 years I was featured in TV telecasts and live concerts throughout Europe, and in the video "You make me feel loved" (you can view some footage in my videos section). In 2000, Stemma Music produced Gazosa's first album, (published by Sugar, Andrea Bocelli's record label). The group won the 51st annual Sanremo Festival, garnering top record sales. In 2002 we developed an internet portal, RiSUONO, dedicated to new talent, so that we may share our experiences and I may provide any assistance to new artists and musicians. To this end, I have also organized and promoted many important music festivals. In 2003 I played with Craig David as he performed the songs "What's your Flavor" and "Hidden Agenda", on TV Rai Uno, Italy's most popular TV station. I also played with Shaggy on his performance of "Strength of a Woman" at the annual televised Sanremo Festival. In 2004 2005 I resumed development and production of new talent bands and at the request of my publisher I have created my own drum lessons manual DRUMTASTIC, that has been sold weekly in newspaper kiosks throughout Italy. Currently I'm touring with MASSIMO RANIERI and I have embarked on a project called DRUM&DjSET, a dynamic show where the rhythm of percussions along with the beat of the drums are played to the scratch of vinyl record mixwhere, I'll tour in numerous venues throughout the world with wellknown djs playing all genres of music styles. Stay tuned!!