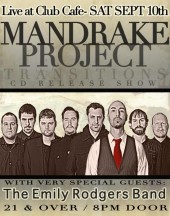 Location:
Pittsburgh, US
Type:
Artist / Band / Musician
Genre:
Rock / Ambient / Experimental
Site(s):
Site
Type:
Indie
BioConnections
Spiritualized
King Crimson
West Indian Girl
Jaga Jazzist
The Outside Royalty
The Boogie Hustlers
Cellofourte
NEW INVISIBLE JOY
A Living Soundtrack
Ishtar Bellydance Band
Halo's Grace
The initial idea of forming a band using the Mandrake Project moniker in early 2002 had less to do with the enigmatic name and more to do with organizing a small rock band with conventional structure. This first incarnation never lasted long enough to make even the slightest imprint on what would occur in the months to come. The backlash of that initial band's failure soon led to a large, unconventional group playing anything BUT conventional rock music. Within a few years (and nearly 30 satellite guests later) this noisy Pittsburgh-based conglomerate, described as a mix between early King Crimson and Slint, found ways to smooth their rougher edges for a more textural and composed approach to songwriting. Awkward and jagged songs morphed into sonic ramps and repetitive motifs more in the likeness of Steve Reich or Spiritualized than Robert Fripp.
In 2006, the band independently released their first full-length, "A Favor to the Muse". The ambitious debut featured a 30-piece girls' choir and several guest musicians playing everything from tuba to theremin. The album received limited but positive praise, mostly due to the lack of breadth upon its release. It was at this time the band essentially glued its core membership in place, and began to utilize the string talents of Rick Nelson heavily in their sound.
Also during this period, the band became aware of the cinematic potential of what they were creating musically and focused their energies on the integration of their music into film. As a result, songs from Favor found their way onto a few film and documentary soundtracks . "An Ode to the Spaceman" was featured in the award winning Cure for the Crash (2009, Inner City Organic Pictures) alongside indie-darlings Bright Eyes, folkies Iron & Wine and post punk luminaries Fugazi. Songs like "The Economy of Motion", "Flame of the Simpleton" & "Sound Audit" were later used in The Journey is This, a documentary about visual artist Tim Kaulen, who had received Pittsburgh Center for the Arts "artist of the year" in 2009.
"A Miraculous Container" was officially released on March 24th, 2009. This album's song writing, selection and production far exceeded anything the band had accomplished prior. Whereas Favor dabbled heavily in the experimentation of rhythms and repetitive textures, AMC delved deep into sonics, big melodies and huge dynamics. The overall approach to the music was softer and more patient. The band was getting exponentially better at writing songs.and recording them.
Within a month's time of the album's release, it was noticed by John Diliberto from the nationally syndicated NPR radio program "ECHOES". The album went into regular rotation on the show, spent five months on the show's Top 25 list (at best reaching #2 in August 2009), and ultimately earned the band an invitation to perform live for the "Echoes Livingroom Concert Series". One of the live tracks recorded during the concert, "Beauxsong" was included on "Still: Echoes" the 15th Anniversary Echoes Livingroom Concert Series CD. This great honor places Mandrake into a league that has hosted many prolific past artists such as Yo-Yo Ma, Al Di Meola, Pat Metheny, Air, and Brian Eno.
Riding the success of AMC, the band continued the its pursuits in film with short works like "Pluck" by acclaimed British stage director Dan Jemmett. The album has also garnered excellent press and AAA radio coverage across North America and Europe since its release. It found its way onto many of 2009's "best of" lists and grabbed album of the year by both French webzine critic Jean-Phillippe Haas (Progressia.net) and WXPN's (Philadelphia) Host Picks. This record is singularly special in the MP catalog not only because of its superb production, but its first time inclusion of vocals.specifically those of the gifted John Schisler. His contribution would change the path of nearly everything the band intended on accomplishing for future endeavors.
A Miraculous Container had only been available for 6 months when Mandrake Project went back to work on recording a new collection of material spanning 18 songs. In true Mandrake fashion, what began as a simple six-track EP has evolved into the upcoming full-length "Transitions" to be released on Glassville Records in summer 2011. Continuously morphing and investigating instrumentation, the band decided to include a keyboardist and vocalist full-time for this current phase of Mandrake Project. John Schisler's impact on the success of AMC was undeniable and his work on the new sessions was an irreversible step in the right direction for the band. For the first time in Mandrake Project's 8 year existence, a vocalist front-man will lead the band. With only a sprinkling of keyboards on any of MP's past recordings, Denny Karl's piano and organ contributions have created a necessary and crucial element to the band's new direction.
The new material takes off where AMC left off, and it continues to march forward into places that the band has never been before. Only this time around, the human voice is the new instrument taking center stage.
Mandrake Project is: Kirk Salopek- Guitars. John Schisler- Vocals. David Chapman Jamison- Drums. Rick Nelson- Violin, Viola, Cello. Ryan Meals- Guitars. Anthony Pecora- Bass. Denny Karl- Piano, Organ, Synth. Benjamin Zerbe- Percussion, Mallets.

Mandrake Project - One of These Days.mp4