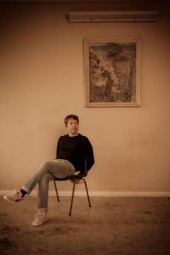 For those who don't know much of the man that is Magnet – here is a brief synopsis… His debut three EP's (Where Happiness Lives, Chasing Dreams, The Day We Left Town) for Ultimate Dilemma created a storm amongst the tastemakers of the world, i-D proclaimed him for his "extraordinary songs," Dazed & Confused were wowed by his "beautiful pop melodies which ebb and flow over slide guitar", Rolling Stone, NME and Q all swooned over his unique charms.

His debut album 'On Your Side' further confirmed what we has suspected all along about Johansen, that his songwriting was not only rich and unique, but that he had the ability to tap into the human vein; of life, love and loss.picking up rave reviews along the way, yet more appreciation in the world of dance, became a major star in his native Norway, soundtracking teen angst on the O.C, weird adult angst on Six Feet Under (and infact many other TV shows/films) and having one of the sleeper hits of the year with his cover of Dylan's seminal 'Lay Lady Lay', a duet with Irish songstress Gemma Hayes (Itself currently soundtracking the Hollywood smash hit Mr & Mrs Smith).

Not content to just invade your world gently, he decided to rock your world too, and spent much of the last three years on tour both on several European, UK and US headline tours, and as special guest support to bands and artists as broad as Doves, Phoenix, Ed Harcourt, Hayes herself, Zero 7, A-ha outdoors to 30,000 people in his hometown and countless others. These experiences have helped paint new Technicolor flow into the B&W and pastel shades of his songs.