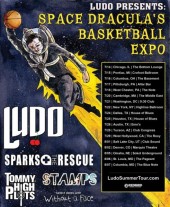 Trying to get a handle on Ludo's music is a little like forcing six blind men to describe an elephant having felt just one side of it. Listen to "Whipped Cream," the first single from the band's sophomore Island Records/Island Def Jam Music Group album, Prepare the Preparations, and you hear what co-founding member, vocalist/songwriter Andrew Volpe, dubs "'70s butt-rock," delivered with a deadpan, tongue-in-cheek irony even Weezer would appreciate.

And while the singer's leering come-on is exaggerated for effect, Volpe never fails to apply the double-edge to those "emotional prototypes", as the laugh dies in the throat, revealing a more pointed "objective" message, much like the similarly satiric "Go-Getter Greg," from their 2008 Island Records debut, You're Awful, I Love You: "I think I'm entitled to your body/Gotta little problem with personal space/I'm pounding the Jaeger/My breath and behavior/Have been driving the patrons away."

After forming in 2003 and releasing two independent albums on their own Redbird label (named after their St. Louis, MO home base) in 2003's self-titled bow and 2005's concept album Broken Bride (both re-released in 2009 by Island), Ludo scored a Top 12 Hot Modern Rock track in "Love Me Dead," the burlesque-style necrophilia smash from their major label bow. And while humor is a vital part of the group's approach, their musical chops place them closer to art-prog artists like Frank Zappa, They Might Be Giants, Ben Folds, Randy Newman and Queen than a novelty act.

"It's kind of a blessing and a curse," admits keyboardist Tim Convy about the band's sense of humor. "But it's a large part of what we do. We're just trying to be genuine and true to the cornucopia of human experience. We have songs that are dark and creepy as well as songs that are stupid and fun."

"Humor shouldn't hit people's ears at an odd angle any more than anxiety, fear, love or lust," says Volpe, whose far-flung imagination sends Ludo's songs soaring into the cinematic stratosphere, an archetypal nerd whose obsessions on the new album include skeletons, pirates, cyborgs, robots, leprechauns, witches, curses, Bonnie & Clyde and '50s R&B, as the lyricist/musician locates the magic in the mundane. Remember, this is a band that takes it name from a character in the movie Labyrinth. "Music shouldn't just be for when you want to feel like a badass or a sad bastard," insists Andrew.

Co-produced once again by Matt Wallace with Marc McClusky, the songs on Prepare the Preparations are a series of cinematic snapshots, ranging from the speed riffs of the futuristic Robocop meets A.I. sci-fi thriller "Cyborgs vs. Robots," the playful Dylanesque romantic imagery of "Anything But You," and the dreamy surrealism of the melodic U2-Coldplay-like "Manta Rays" to the Tim Burton-esque danse macabre/Cab Callaway big band jazz of "Skeletons on Parade," the Elvis Costell-ish noir of the Bonnie and Clyde bank-robbers on the run in "All the Stars in Texas," the rum-soaked pirate chantey "Rotten Town" and the epic "Battle Cry," which answers the question as to what became of the other side in "We Are the Champions." All with twists that turn the stereotypes on their head.

"We are young/But we will never die/We won't give up/This is our battle cry/ We will defeat the other guy."

"I wrote 'Battle Cry' as a response to the Queen song from the perspective of the people who just lost," explains Volpe. "What do you do in the fact of that? You either rise up from the ashes, delude yourself into thinking you still have a chance or just use brute force to massacre the victors."

That musical eclecticism is often overlooked because Ludo make such damn catchy radio singles. In fact, Volpe is a college music composition major, and guitarist Tim Ferrell a muso/savant whose interests include microtonal music and the "notes between the notes of the western scale," while Texas native Matt Palermo manned the bass drum in his high school marching band.

"We grew up listening to '80s and '90s pop radio," says Convy. "We won't deny ourselves a good large chorus, with harmonies and plenty of theatricality."

How can the same band be responsible for the spacious dub-wise world beat of "Too Tired to Wink," their look back at the exhaustion of two years on the road working their last record and the '50s soul torch ballad, "I'll Never Be Lonely," its scratchy gospel organ underlining Volpe's sweet ode to his grandparents' romance "on a hot Kansas night"? Let alone those gently plucked guitar strings echoing the relentless ticking of a clock which build to a climactic rebirth amidst the claustrophobic self-doubt of "Overdone" or Ferrell's ominous "Safe in the Dark," channeling those childhood fears about "things that go bump in the night," which often linger into adulthood.

"I'm a Romantic with a capitol R," says Volpe. "I think the moon is beautiful, the stars are beautiful, the mountains and ocean are beautiful. The same way the macabre can be beautiful. Those standard 19th century poetic images still work, even if they are clichés. Just because you're intelligent doesn't mean you can't have fun. Sometimes it's OK to just indulge. You can be smart and be moved by something simple There's something satisfying about taking those icons and hammering them home."

Perhaps that's the best way to describe Ludo. Simple, genuine and down-to-earth, but smart. They can be funny, but also dead serious about their craft. In all, a rock and roll band for the post-modern 21st century.

"We feel each individual song can stand on its own," explains Volpe. "You want something that can be successful on the radio, and at the same time, keep your fans happy. And I think this record will keep them very happy."

"Andrew's imagination is unmatched in its inventiveness. We just take his crazy ideas and make them accessible," nods Convy. "Our goal has always been to be able to do this for awhile. There's more of a sense that we belong this time, even if we still don't quite fit in."

Spoken as a true Ludo geek.