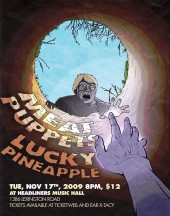 Last Days of Man on Earth: "Like kinda if Zappa was in Slint and they went vacationing in the Peruvian Andes and then came back and recorded an album immediately. See, my number one complaint about prog and proglike dreck like math rock is that it is boring as fuck. I rented a Tortoise album once from the library and it nearly killed me. I have the scars to prove it. But Lucky Pineapple is really fun and entertaining and surprising. This is a really great album and it throws in a lot of disparate elements together while being totally engaging."

Joshua Hammann, Velocity: "Lucky Pineapple offers sprawling, winding compositions that defy many of the suggested guidelines for writing pop music, and we are all the better for it. There are moments of rock, funk, jazz, and even tribal tensions, and they are moments created out of Lucky Pineapple’s insistence upon writing music, not just songs.”.

Stephen George, Louisville Eccentric Observer: “The band draws from a wild tapestry of influence, with some bounce like good reggae and awkward time signatures (like jazz drummer Hamid Drake, perhaps). There’s some Zappa absurdity welded into the frame, but the sound’s got good wheels that roll enough to really make you move.”

Jason Jordan, Ultimate Metal: "With songs that recall the vibrant shimmering of tropical paradises – by way of the titles and music itself naturally – it’s difficult to resist lying back and feasting on the fruits of Lucky Pineapple."

Lucky Pineapple: seven people, seven points-of-view. A schizo-suicide of stylings and sounds. Decide for yourself.