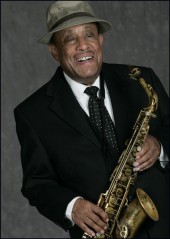 LOU DONALDSON - alto saxophone - BORN: November 1, 1926, in Badin, NC - Alto saxophonist Lou Donaldson, who recorded for Blue Note from 1952-63 and 1967-75, was a supremely soulful player who established a distinctive sound that enabled him to emerge from under the vast shadow cast by

Charlie Parker's legacy. A leading member of the earthy, blues-based hard-bop movement of the mid-1950s, Donaldson later helped establish the widespread popularity of sax and organ combos during the late 1950s and early 1960s. Donaldson began playing clarinet when he was 15 before switching to the alto saxophone. And he performed in a military band while serving in the Navy after college before moving to N.Y. in 1952. It was then, at the age of 25 that Donaldson made his Blue Note debut on a Milt Jackson quintet date. He followed this with his label debut as a leader, a quartet session with Horace Silver, Gene Ramey and Art Taylor. In addition to recording with Thelonious Monk and working briefly with Charles Mingus and Sonny Stitt, he co-led a quintet recording with Clifford Brown in 1953 and in 1954 took part in a memorable engagement with Brown, Silver, Art Blakey and Tommy Potter, documented on A Night At Birdland, Vols. I & II, that was a precursor of the illustrious Jazz Messengers. The Best of Lou Donaldson, Vol. I charts the saxophonist's progression from a swinging hard bopper collaborating with Blue Note stalwarts Donald Byrd, Sonny Clark, Horace Parlan, Wayne Shorter and Grant Green, to a rib-joint funk master creating "soul jazz" with organists Baby Face Willette and Big John Patton. The wider audience Donaldson enjoyed after having a juke box hit in 1958 with the title track to Blues Walk inspired the bluesy follow-up albums Gravy Train (1961) and Good Gracious (1963). Alligator Boogaloo, Donaldson's second album after returning to Blue Note in 1967, produced two hit singles and received airplay on major R&B stations that usually didn't program jazz. This was followed by Mr. Shing-A-Ling (1967), a blockbuster that also enjoyed a level of "crossover" success rare for a jazz album. The funky new sound Donaldson served up on these two albums, which feature organist Lonnie Smith, proved so successful that he never released another "acoustic" album for the label. Highlights from the saxophonist's second Blue Note tenure, which yielded 13 albums including Say It Loud (1968), Hot Dog (1969) and Everything I Play Is Funky (1970), are compiled on The Best of Lou Donaldson, Vol. II. -- Mitchell Feldman

Lou Donaldson Everything I Play Is Funky (live)