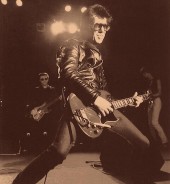 Ed first played with Link in 1963 and became a full-time Rayman in 1964 taking over from Shorty Horton on bass. He and John's father, Jack Van Horn, joined The Raymen at the same time after playing in the Washington, DC area as The Fender Benders. After Link left the DC area, Ed and Jack continued playing and recording in a succession of bands including Face Value, The Pack, and again as The Fender Benders. During that time they both played with Link on each of his return trips to the DC area at clubs like The Psychedelly, The Wax Museum, and the old 9:30 Club. In addition to the live work with Link, Ed has appeared on no less than 10 records with Link, including hits such as Branded, Good Rockin’ Tonight, and Baby Watcha Want Me. Since the first Link Wray Tribute in January of 2006, Ed has kept Link Wray's Raymen together to continue to bring Link's music to his many fans worldwide.

Taught by the master himself - Link Wray (a family friend of the Van Horn’s), John got his start at age 16 playing with Link & Ed Cynar at the Wax Museum (see cover of Capitol Rock for a shot of Link, Ed, & John at the Wax) and the old 9:30 club in 1983/84. Through the mid ‘80s he was with several local cover bands, playing venues like the Bayou, and the Copa (now Jaxx). Known best for his distinctive lead guitar style – in the spirit of Link’s evolved “Screaming Red” sound, John has played live & recorded with artists such as Anton Fig, Tommy Conwell and the Young Rumblers, and the Quicksilver Messenger Service. He continues to keep the spirit of Link’s sound & style alive for Link Wray fans.

Born in the Midwest, Pat started playing drums in his grade school band. When in high school, he played in the Jazz and Stage band. In 1977, Pat moved to Northern Virginia where he met John Van Horn & Link Wray through a DC radio station, WGTB. Pat played with John & Ed in the band The Pack, and later with the Fender Benders. Pat has also played and recorded with Link’s brother, Doug Wray. Patrick has also played with other area bands such as Hurricane & Four+1. Pat has the style and power that is essential in keeping Link’s music alive.

In The Studio With Greg Calbi - Review of Savage!

Greg Calbi has mastered and engineered for some of the most influential and legendary names in both jazz and classic rock. Greg has lent his studio expertise to such greats as Bob Dylan, The Ramones, Blondie, Supertramp, John Lennon, Bruce Springsteen, Deep Purple, U2, Iggy Pop, The Allman Brothers, Blues Traveler, Fountains of Wayne, Joan Jett, Lou Reed, Sarah McLachlan, Lenny Kravitz, John Mayer, and David Bowie.

We’re pleased to present Greg Calbi’s “In the Studio With“ review of our instrumental song - Savage!

“Really great job on this one by the musicians and the engineer and whoever was involved in it. This would be a good model for full spectrum recording, lots of clear low-end, really good drum recording - taking the strength of what seems to be a really tight drummer and emphasizing it without going too much over the top.

This is kind of a good template for balance. And I think the guitar sounds are exciting, the reverb is wet enough to be exciting, but it’s not drenched to the point of where it’s over the top. It’s just a really tastefully done powerful track. It’s an instrumental track and it really works for me.

And something which I always recommend to everybody who I work with who is kind of new and coming up is to really focus in on what you like and have a good bunch of reference CD’s to bring into your work environment to get a sense of what kind of balances are correct or incorrect in the room that you’re working in. Apparently [Link Wray’s Raymen®] did have that together in their environment and did a real nice job.” - Greg Calbi

Thanks for the great review, Greg!

Link Wray & His Ray Men - Law of The Jungle.