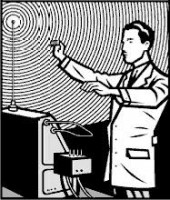 He invented the theremin (also called the thereminvox) in 1919, when his country was in the midst of the Russian Civil War. After a lengthy tour of Europe, during which he demonstrated his invention to packed houses, Theremin found his way to the United States. He performed the theremin with the New York Philharmonic in 1928. He patented his invention in 1929 (US Patent 1,661,058 [1]) and subsequently granted commercial production rights to RCA.

Léon Theremin set up a laboratory in New York in the 1930s, where he developed the theremin and experimented with other electronic musical instruments and other inventions. These included the Rhythmicon, commissioned by the American composer and theorist Henry Cowell.

In 1930, ten thereminists performed on stage at Carnegie Hall. Two years later, Theremin conducted the first-ever electronic orchestra, featuring the theremin and other electronic instruments including a "fingerboard" theremin which resembled a cello in use.

Theremin's mentors during this time were some of society's foremost scientists, composers, and musical theorists, including composer Joseph Schillinger and physicist (and amateur violinist) Albert Einstein. At this time, Theremin worked closely with fellow Russian émigré and theremin virtuoso Clara Rockmore.

Theremin was interested in a role for the theremin in dance music. He developed performance locations that could automatically react to dancers' movements with varied patterns of sound and light. While working with the American Negro Ballet, the inventor fell in love with the young prima ballerina Lavinia Williams. His eventual marriage to the African-American dancer caused shock and disapproval in his social circles, but the ostracized couple remained together.

Theremin abruptly returned to the Soviet Union in 1938. At the time, the reasons for his return were unclear: some claimed that he was simply homesick, while others believed that he had been kidnapped by Soviet officials. His wife Lavinia was always certain the latter was true.

Many years later, it became known that Theremin had indeed been seized by Soviet KGB agents and forced to return to his native land. Shortly after he returned, on Joseph Stalin's order, he was imprisoned at Butyrka and later sent to work in the Kolyma gold mines, both under the harshest imaginable conditions. Although rumors of his execution were widely circulated, Theremin was, in fact, put to work in a sharashka, together with Andrei Tupolev, Sergei Korolev, and other well-known scientists and engineers. The Soviet Union rehabilitated him in 1956.

Many years later, it was revealed that Theremin's activities in United States to develop, perform, and commercialize his electronic musical instruments were also a cover for him to commit industrial espionage on behalf to the Soviets.

Also, Theremin invented the first covert listening device (or "bug") to use passive electromagnetic induction to transmit an audio signal. "The Thing", as it was called, was very simple by today's standards, but ingenious. It consisted of a tiny capacitive membrane (a condenser microphone) connected to a small quarter-wavelength antenna; it had no power supply or active electronic components. The device, a passive cavity resonator, became active only when 330 MHz microwaves were beamed to the device from an external transmitter. Sound waves caused the microphone to vibrate, which varied the capacitance "seen" by the antenna, which in turn modulated the microwaves that struck and were reflected by "The Thing". A receiver decoded the modulated microwave signal so the sound that the microphone picked up could be heard, in the same way that an ordinary radio decodes modulated radio waves into sound. The variable capacitance that made "The Thing" work was the same principle that Theremin used in his eponymous musical instrument.

Theremin's design made the listening device very difficult to detect, because it was very small, had no power supply or active components, and did not radiate any signal unless it was actively being powered and listened to remotely. The same design features gave the device a potentially unlimited operational life.

Theremin's device was embedded in a carved wooden plaque of the Great Seal of the United States. On August 4, 1945, Soviet school children presented the bugged carving to U.S. Ambassador Averell Harriman, as a gesture of "friendship" to the USSR's World War II ally. It hung in the ambassador’s Moscow residential office until 1952, when the existence of a bug was accidentally discovered by a British radio operator who heard conversations on an open radio channel. The CIA found the device in the Great Seal carving, and Peter Wright, a scientist and former MI5 counterintelligence officer, eventually figured out how it worked.

Theremin invented the first motion detector for automated doors and worked on an early burglar alarm.

In the 1970s, Léon Theremin began training his nine-year-old niece Lydia Kavina on the theremin. Kavina was to be Theremin's last protégé. Today, Kavina is considered one of the most advanced and famous thereminists in the world.

In 1991, Léon Theremin returned to the United States, where he was reunited with Clara Rockmore who performed a number of concerts at this time. He returned to Russia and died in Moscow in 1993 at the age of 97.

From Wikipedia, the free encyclopedia

In Bob's Own Words: A Tribute to Leon Theremin
▶ View All Videos