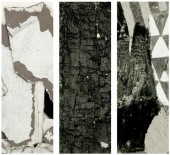 "Lansing-Dreiden is some sort of weird musical time machine, skipping lazily from 1982 to 1985 to 1989 and back again. Where Ariel Pink took seventies AM radio, and turned it into his own disheveled, cracked demented pop vision, Lansing-Dreiden instead take eighties FM radio and classic eighties MTV and gives them their own warm and warped, precious and polished spin."

The Diving Island, Lansing-Dreiden's third ambitious recorded artifact, is a lush omnibus of U.K. pop styles of the 80s; pleasing wisps of the Stone Roses, ABC and OMD (with guitars) flit through the mannered harmonies and atmospheric production quality. The dramatic album is so exactingly constructed that it would seem to challenge the definition of art versus craft, but its easier and more enjoyable to ignore such distinctions. Lansing-Dreiden prefers anonymity, claiming to send ambassadors (sure) to appear in galleries and perform under reconfigured names at clubs. Whats it all mean? This record is so lovely, it doesnt really matter.

A psychedelic, new wave, pop phenomenon of unusually pleasant proportions, The Dividing Island merges decades and styles with the kind of ease that makes one wonder: why hasn't anybody done this before?

Lansing-Dreiden - Part Of The Promise

Lansing-Dreiden - An Effect of the Night, Part 2

Lansing-Dreiden - An Effect of the Night, Part 1