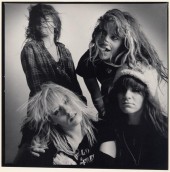 L7 have toured the world playing in clubs, concert halls, and festivals, some of which were: Offshore (Australia), Go Bang (Germany), Lollapalooza (U.S.), Hollywood Rock (Brazil), and Reading (U.K.). In addition to appearing on television shows internationally, including David Letterman, L7 starred in the John Waters movie "Serial Mom", and are the subject of a rockumentary by former Nirvana bassist Krist Novoselic entitled "The Beauty Process."

The L.A. based band formed in 1985 consisting of Donita Sparks, guitar and vocals, Suzi Gardner, guitar and vocals, Dee Plakas, drums, and at various times on bass Jennifer Finch, Gail Greenwood, and Janis Tanaka, have also played many benefits for organizations like Rock For Choice (which they formed in 1991), Greenpeace, and Act Up L.A., to name but a few.

L7 - The Masses Are Asses